Central twice built a 14-point lead in the third quarter, including at 45-31 as Sophia Horton — the game’s leading scorer with 29 points — scored on one of her many putback baskets.

“They started crashing the boards on offense,” said Ste. Genevieve head coach Jordanna Walk-Robison, “and we didn’t do a good enough job on Horton to keep her from getting in there.”

Walk-Robison said Horton was able to get some easy looks, or draw contact.

Boy, did she draw fouls. Horton finished the game going 15-of-17 from the free-throw line and the Rebels accumulated 31 free-throw attempts in all.

Meanwhile, the Rebels held the Dragons to one shot on their possessions. 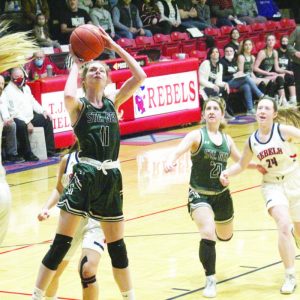 Ste. Genevieve (4-3 record) didn’t go away easily; however, as the Dragons crept within five points three times in the fourth quarter as Maci Reynolds scored either on dribble drives or successful free throws.

“The girls never gave up,” Walk-Robison said. “I commend them for that, but it’s hard to continuously keep getting down and clawing your way back … especially with a good team like Central.”

Sydney Bumgardaner canned a 3-pointer, and Jayden Pullins scored inside the paint in the fourth quarter to help keep the Dragons close as well.

Horton also was the game’s leading rebounder with 10 caroms.

For Ste. Genevieve, Reynolds tossed in a Dragon-best 26 points to go with a team-leading five assists.

Abby Moore contributed 10 points (including a pair of 3-pointers) and a team-best eight rebounds. Bumgardaner added five steals to lead the Dragons in that category.

Central built a 16-6 lead in the first quarter, before Ste. Genevieve cut the Rebel margin to 18-17 at the end of one. The score was deadlocked twice in the second quarter, and Central was ahead 31-29 at the break.

This marks the eighth time Central (9-0) has won the Sechrest Tournament since 2011, with St. James capturing the title in 2012 and Ste. Genevieve last year.