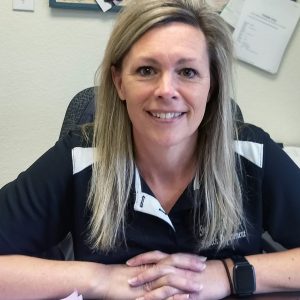 Jennifer Mueller is confident she is up to the huge challenge of taking over the Ste. Genevieve County Health Department.

Like Chester W Nimitz, who took over command of the U.S. Pacific Fleet after Pearl Harbor, Mueller is taking over the health department at a trying time, in the midst of the COVID-19 pandemic and just as the logistics of distributing vaccines for the caronavirus are being worked out.

In addition, since long-time administrator Sandra Bell left in early July, the department has fallen behind in billing and other paperwork critical to maintaining incoming revenue.

In short, Mueller is climbing into the hot seat.

The longtime nurse and department worker is confident she can face up to the duties, though.

The COVID-19 vaccine from Moderna is foremost on her mind.

VACCINE TO BE GIVEN IN TIERS

“My biggest focus right now is getting the vaccine and being able to coordinate how we’re going to get that out to people, based on the tiers that were provided to us by the state,” she said.

“Right now we were only able to order for Phase 1-A. Until the stater gives us permission to order for the next, which is 1-B, we can’t even begin to make appointments, because we have no idea when we’ll get it.”

Phase 1-A directs the vaccine to long-term care facility residents and staff and then to patient-facing health care workers.

Phase 1-B will  give the vaccine to those age 65 and above and to younger high-risk individuals. First responders and “essential workers,” such as childcare workers, teachers and education staff, water/wastewater workers, energy workers, critical manufacturing workers and food and agriculture workers.

While Mueller and her staff are letting Ste. Genevieve County Memorial Hospital personnel decide which workers get the vaccine, the health department will have to make many of the decisions in Phase 1-B.

“That’s going to be hard,” Mueller said. “We’re still working that out. We will definitely collaborate with the hospital when we’re in this group because we want to be giving this together.

“It’s going to be tough. That’s why we really want to work together with the hospital. We’re hoping they can order vaccines at the same time we can order vaccines, so we can give it in multiple places, There’s a lot on the table we have to figure out, but we have time.”

MODERNA WILL BE VACCINE USED

While Phizer’s vaccine was the first to be approved, it comes with serious logistical issues. It needs to be stored in temperatures 96 to 158 degrees below zero, Fahrenheit. That, as well as availability, led the health department to look toward Moderna’s vaccine instead.

“Everybody can’t order Phizer; there isn’t enough vaccine for everybody to order Phizer,” Mueller said. “Not to mention not everybody can buy these freezers and not everybody can get all the dry ice they need. So they encouraged some of the smaller entities to please order Moderna. So, for us that was already the answer, because we already had the refrigerator and that was what we were asked to do.”

She said SGCMH has also made the decision to go with the Moderna vaccine.

Down the road, should Johnson & Johnson or another company come out with a vaccine that is either more effective or more plentiful, Mueller said she would be willing to consider it instead of Moderna.

“Absolutely,” she said. “We would base it on how effective it is and availability.”

She added, though, that the vaccines developed so far are two-shot processes.

“We’ll have to think about all of that,” she said.

“I think the team we have here is really, really good and I have a lot of faith in them,” she said. “I hope they have faith in me. I think we can make it.”

BILLING, PAPERWORK WILL BE CAUGHT UP

Mueller said she would “absolutely” be able to get the office caught up on billing and other urgent paperwork.

She spent years in both counties, “doing everything there from pre-natal to family planning, immunizations, STDs,” as well as walk-in services and WIC (Women, Infants, Children program).

“I think what’s most important, I have done the WIC budget and billing the last couple of years or so. I do think that will help me,” she said. “My experience with the state is they are very willing to help.”

VACCINE IS READY FOR DISBURSING

The Phase 1-A supply of  the Moderna vaccine  has arrived.

“We ordered 200 doses; we got all 200,” Mueller said last Wednesday. “The hospital came over this morning and gave 10 to their employees, just kind of a trial run. The rest will be given on Tuesday and Thursday of next week.”

“It went OK. We just wanted to see, logistically-wise, how are we going to do this?” Mueller said. “Because, after you give it, that person is supposed to sit for 15 minutes to be monitored, since it’s all brand new. Everything went great. It’s for them (at the hospital), so they’re going to be giving it. We’ll help if they need it.”