“Abby had a really good game for us on the boards, which gave her more confidence,” said Ste. Genevieve head coach Jordanna Walk-Robison.

Walk-Robison said it was pleasing to see Moore be in position to be successful. 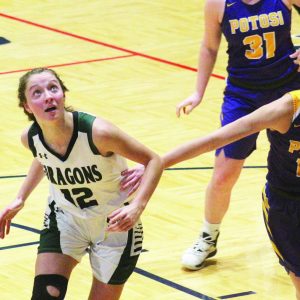 Ste. Genevieve squared off with Steelville in the semifinals on Tuesday. The Cardinals topping Fredericktown 64-36 during Saturday’s quarters. That game took place after the press run of the Dec. 30 edition.

For the second straight Saturday in Park Hills, Maci Reynolds’ blow-torched the nets — this time for 29 points on

eight field goals (including five 3-pointers) and 8-of-10 shooting from the free-throw line.

Ste. Genevieve and Potosi were deadlocked at 8-all in the opening quarter before the Dragons went on a 21-3 run over more than seven minutes, capped by a pair of successful Reynolds’ free throws.

Potosi’s Paige West canned a 3-ball from the wing, slicing the Dragons’ lead to 32-18 at the 2:42 mark of the second quarter.

Ste. Genevieve (3-2) responded with a 10-0 scoring burst, with Morgan Schwent scoring off a feed from teammate Sydney Bumgardaner to complete a 42-18 halftime cushion.

The Dragons twice had a 37-point lead in the second half, and the Missouri-mandated running-clock rule was enforced for the early portion of the fourth quarter.

Ste. Genevieve’s reserves played a majority of this salvo with Maya Watts, Regean Naeger and Schwent dropping 3-balls on the Trojans.

The Dragons are still alive to repeat as Sechrest Tournament champions, stopping what had been a run of six straight titles for host Central.