For the second consecutive year, a Ste. Genevieve High School softball player has decided to continue her career at Mineral Area College in Park Hills.

“My older sister, Kaitlyn, told me the teachers were awesome over there,” Kreitler said in a telephone interview with the Herald. 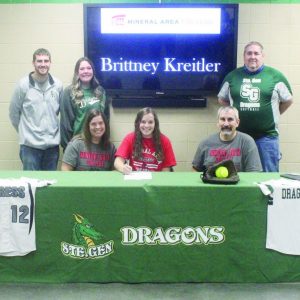 Guemmer has told Kreitler she will be primarily used at shortstop with the Cardinals; however, she also will see time inside the circle as pitcher.

Kreitler has been an outstanding player for Toombs, with the most recent season in 2019 due to the COVID-19 (coronavirus) pandemic.

“She’s coachable,” Toombs said. “She does anything and everything for us, and she’d worked hard in school ball and travel ball. She makes good decisions (in fielding).”

Toombs said Kreitler typically serves as the Dragons’ lead-off batter because of her hitting eye for drawing walks plus some occasional power.

Kreitler has been a part of the Ste. Genevieve softball program as it has transitioned from a fall to a spring activity.

Brittney played a major role in the Dragons tying their school record for wins during the 2019 campaign with 17 — against just six losses — on a squad that also featured Lexi Bova and Alyssa Huber.