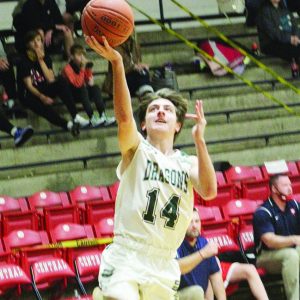 However, COVID-19 (coronavirus) forced Arcadia Valley out of the longtime event, and that put the Dragons in the uneasy position of playing host Central’s junior varsity unit.

All sorts of scenarios on the outcome of the game danced in Ste. Genevieve head coach Robert Coleman’s mind.

In the end, the Dragons downed the Rebels 81-50 in front of an expected decidedly partisan crowd at Foulon Field House.

“I’m glad we were able to pull away, and all 12 guys played and scored,” Coleman said, sounding relieved.

Ste. Genevieve (5-3) faced Farmington in the quarterfinals on Tuesday evening, too late for this press run of the Herald. The Knights defeated Potosi, 77-75, in this highly competitive nightcap after the Dragons and Rebels played.

The Dragons were ahead by just nine points (38-29) at intermission, and they played much better in the second half — eventually handling depth-challenged Central.

“Our energy picked up,” Coleman stated. “Our full-court defensive pressure gave them (Central) some trouble and wore them down.”

Hunter paced all scorers with 27 points on 9-of-18 shooting from the floor and 2-of-2 from the free-throw line. He also grabbed five rebounds (four on the offensive glass) and had two steals.

Rudy Flieg was the Dragons’ only other double-digit scorer with 10 points to go with a team-leading six rebounds. Logan Trollinger produced team-highs in steals (four) and assists (five). Blake Morganthaler contributed four assists.

Zack Boyd, who was Central’s leading scorer with 20 points, trimmed Ste. Genevieve’s lead to 27-26 with less than two minutes remaining in the second quarter.

Trollinger swished a 3-pointer along the baseline to give the Dragons a 50-36 lead at the end of three — and Ste. Genevieve netted a season-high 31 points in the fourth quarter to win going away.