Before the Dragons’ “Senior Night” basketball game versus Sikeston, Flieg’s biography was read to the crowd.

Flieg said she would continue her outstanding track and field career at Southeast Missouri State University in nearby Cape Girardeau. 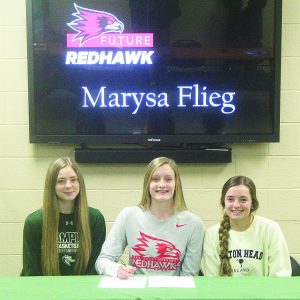 “It was extra special because nobody else knew,” Flieg said. “I wanted to shock my parents.”

Other schools were looking at Flieg, a noted javelin specialist. Marysa said she’s currently undecided on her major; however, she’s currently planning on a business management career track.

Huck was present along with assistant coaches Sierra Boyd and Chris Thompson during Flieg’s signing ceremony on Thursday, Dec. 17, in the R.W. Thomas Projection Room.

“I know she will do some amazing things there,” Huck continued. “She has the drive and determination to be extremely successful in the javelin, as she has already proven. We cannot wait to see her soar.”

Flieg will be competing for an NCAA Division I school, and member of the Ohio Valley Conference in SEMO.

But, Marysa is used to the spotlight — and she first came to national prominence at the AAU Junior Olympics Track and Field meet in Greensboro, N.C., during the summer of 2019.

Flieg captured the national title with a career-best throw of 136-feet, 1-1/2 inches, with the best mark in that age division during such time, as a member of the Jefferson County Jets Club.

It all started when former teammate Avery Reed encouraged Flieg to take up the javelin. And Marysa has made the event her own.

Flieg has made dramatic improvements in javelin from year to year, with a season-best mark of 109-8 as a freshman.

During her sophomore year, Flieg marked at 131-5, which was good enough for second place in the Class 3 Missouri State High School Activities Association state meet in Columbia in May 2019.

Track and field and basketball teammates Megan Aubuchon and Maci Reynolds were also present to watch Flieg put pen to paper and sign at SEMO.