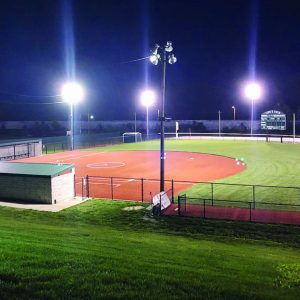 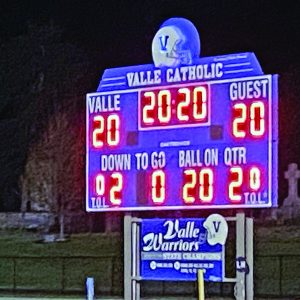 Activities associations from across America shutdown spring sports at the onset of the COVID-19 (coronavirus) pandemic in mid-March.

In Dumas, Texas, a small city located in that state’s panhandle region, the #BeTheLight campaign started — with stadium lights on for an hour every night to let students know they weren’t forgotten.

Ste. Genevieve joined what turned into a national phenomenon as light reached everyone during one of our country’s percevied “darkest times.”

“There were several nights that the lights were on at the field (Fr. John Dempsey Field), and also several nights when we lit up the school as well,” Fischer said.

Neither Valle Catholic nor Ste. Genevieve has boys’ tennis or girls’ soccer; however, plenty of Warriors and

Dragons are out for sports both schools sponsor.

Valle Catholic standout baseball player Aiden Heberlie focused on playing for his summer travel team — which ultimately helped him gain the confidence in verbally committing to play at the college level for the University of Missouri.

“It was really upsetting,” she said. “I was looking forward to accomplishing many of my goals; but, it was taken away.”

Samples had been in the middle of building the middle school program, with as many as 20 boys reported out to give track and field a shot.

“It was devastating,” said Zoughaib, with a double-digit number of senior athletes unable to show their skills either on the track or in the field.

“For some, track is the only thing they do,” Zoughaib continued, “and it was taken away. We had some talent.”

The Warriors had many skilled performers, including shot putters Parker Skaggs and Lauren Staab among them.

Gone was the ping of an aluminum bat. Tennis rackets weren’t heard, or cleats booting a soccer ball. There was absolute silence, instead of the roar of a crowd, with athletes unable to blaze down the track in the 100-meter dash at state.

By the middle of March 2020, MSHSAA barely had completed the state wrestling tournament.

During the course of the summer, with COVID-19 still present, MSHSAA went “full steam ahead” with fall sports — but, it also accommodated schools wishing to move all athletics to spring for what was termed “an alternative season.”

Missouri schools choosing to play fall, and eventually winter sports, did so in accordance with local government entities such as the Ste. Genevieve County Health Department.

Two-week quarantine became the new normal, and a preventative measure against the spread of COVID-19.

For Valle Catholic, that also afforded Naeger the chance opportunity to schedule eventual Class 3 state champion Blair Oaks for a regular-season game in late September at Dempsey Field. The Warriors pinned the only loss of the year on the Falcons, 35-28.

• Both Valle Catholic and Ste. Genevieve football advanced to the third round of the playoffs.

• The Valle Catholic volleyball team placed second at state, its best-ever finish as a Class 2 program. Ste. Genevieve won both regular-season and postseason conference titles before falling in the playoffs to rival Central of Park Hills.

COVID-19 continues to impact schedules, teams and athletes. But, with a vaccine on the way — everyone sees the proverbial “light at the end of the tunnel.”