“We got it to a six-point deficit,” Search said. “We were where we wanted to be with six minutes left. We were in good position; but, it was just too hard to overcome against a good team. I am proud of our guys.”

Chase Fallert sank a 3-pointer from the right wing with 5:53 remaining in the fourth quarter, cutting the Rebels’ lead to 61-55. 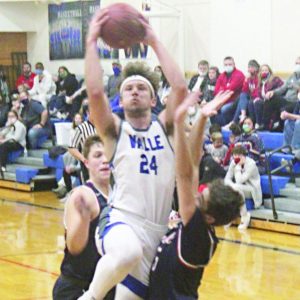 But, Central’s Mason Williams responded with a 3-ball of his own, extending the Rebels’ lead back to a minimum of three possessions.

Cory Stoll, who played his finest game of the season, made one free throw to cut it back to 64-56 at the 5:12 mark of the fourth. Stoll netted a season-high 16 points, with six rebounds and four assists.

However, that’s as close as the Warriors would get the rest of the way — and Valle Catholic dropped to 4-3 heading into Tuesday night’s game at Herculaneum.

Search said the Rebels’ were a stout rebounding team, grabbing a dozen boards on the offensive glass alone.

Bryant finished the game with 13 free-throw attempts, and the Rebels were 11-of-19 (57.9 percent) from the free-throw line.