The Valle Catholic wrestling team is one of the smallest schools in Class 1, so the Warriors typically face much larger schools.

Last Wednesday was no exception as the Warriors played host to Class 4 Oakville and Class 3 Festus.

Festus topped Valle Catholic, 58-18, while Oakville earned a 51-24 victory over the Warriors.

“We have a young group of wrestlers,” Gegg said. “When you wrestle against large schools, they have more numbers and more upperclassmen. They are more experienced.” 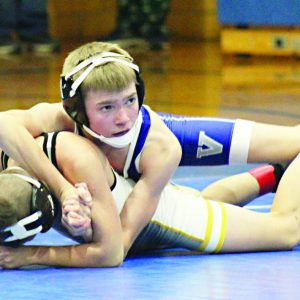 But, the Warriors still managed to earn several victories on the way.

In the match versus Festus, Valle Catholic 120-pounder Joseph Flieg recorded a quick fall over Carter Wallace in just 19 seconds.

Jacob Calbreath pinned Christopher Bentrup in the same amount of time in the 220-pound clash.

Okenfuss pinned Dzenan Fazlic in only 0:33 while Gegg needed 2:59 to pin Joshua Bayer, rounding out the Warriors’ successes.

Valle Catholic is off until Jan. 5, 2021, when the Warriors travel to Sikeston for a triangular which also will feature Poplar Bluff.

The Warriors are set to wrestle in the Ste. Genevieve Duals on Jan. 9, and their next home match is Jan. 11 — a triangular against New Madrid County Central and Potosi.