The Warriors did so at the expense of Grandview in the consolation bracket of the Black and Red Doe Run Classic.

Valle Catholic was set to play for fifth place last Friday versus Pacific. However, Pacific canceled the game due to COVID-19 (coronavirus) concerns. 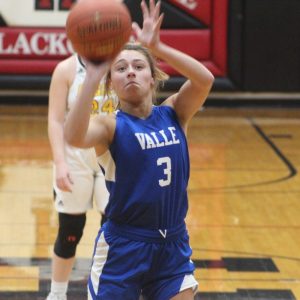 “Bryna (Blum) had eight steals,” Bauman noted. “I thought what we did on defense allowed our offense to get in a groove. It was a big night for us to get that first win under our belt.”

Riley Siebert and Hannah Fowler also chipped in with three steals each as Valle Catholic forced more than 20 Grandview turnovers.

Perhaps the best part of the game was that every girl on Valle Catholic’s team saw playing time — including reserves Rylee Overmann, Nicole Gegg and Lexi Ritter — which is more important than ever since the Warriors don’t have the numbers for a junior varsity unit.

Thanks to that stout defense, Grandview scored just seven points on Valle Catholic during a stretch from 55.4 seconds left in the first quarter to a Natalee Moore 3-pointer with 5:56 remaining in the fourth quarter.

Bauman also lauded the girls for boxing out well, limiting Grandview to one shot on many possessions. Siebert and Fowler combined for 13 rebounds.

Siebert was Valle Catholic’s leading scorer with 11 points, and Bryna Blum also cracked double digits with 10 — including one 3-pointer. Fowler chipped in with seven points, and Sam Loida finished with six on two 3-pointers as she began looking more for her own shooting opportunities.

Valle Catholic was ahead 22-14 at intermission, and the Warriors extended their lead to 30-19 at the end of three — capped by a Blum steal-layup combination.

Blum gave the Warriors their largest lead of the game (37-21) on a bank shot at the 5:05 mark of the third quarter.

Grandview then chipped away at Valle Catholic’s margin, but the Eagles couldn’t get any closer than a seven-point deficit (39-32).