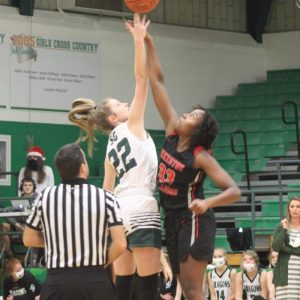 The game featured 38 total fouls, and one girl from each team fouled out.

“They are a very physical team,” Ste. Genevieve head coach Jordanna Walk-Robison said of Class 5 Sikeston, “especially underneath, and we didn’t handle it well on putbacks, and we let them move us away from the basket.”

What’s more, Sikeston has one of the smoothest players in all southeast Missouri in the form of Karris Allen — who paced all scorers with 24 points including two 3-pointers and 6-of-8 from the free-throw line.

Unfortunately for Ste. Genevieve, games have been few and far between so far — with the Dragons only other contest on Nov. 25 versus Herculaneum.

Walk-Robison called the loss a learning experience for her team, especially during the final minute when split-second decisions were made.

“The hope is that after its happened to you,” she said, “you can learn from it and make adjustments.”

Also with such a physical contest, it turned into an “inside” game with not much happening past 15 feet away from the basket.

Marysa Flieg made two of the Dragons’ three 3-pointers as part of a team-leading 18-point performance. Flieg scored many of her baskets on mid-range jumpers.

Ste. Genevieve clung to a delicate 44-43 lead heading into the fourth quarter of this taut affair — in which Sikeston had the game’s largest lead, an eight-point margin twice in the first period (18-10, 20-12).

After Allen sank a pair of free throws, Flieg responded with a 3-ball from the wing to cut the Bulldogs lead to 56-54 at the 2:18 mark of the fourth.

Aubuchon scored the last three Dragons points on a putback basket and one free throw. She also finished the game with a team-best 13 rebounds, including eight on the offensive glass.

Maci Reynolds swiped a Dragon-best four steals and Aubuchon had three, including a late one that nearly helped Ste. Genevieve force overtime.