“I thought the end result was magnificent,” Rolfe said. “I thought we had a lot of obstacles to overcome, but we worked very hard.”

Virtually all of Ste. Genevieve’s other annual events were canceled this year, due to the COVD-19 pandemic – the French Heritage Festival, the county fair, Jour de Fete, the Ste. Genevieve History Conference, Rural Heritage Days, Spring Forward For Down Syndrome, La Veilee, and the traditional La Guignolee, among others.

Making adjustments on the fly, Rolfe and her committee were able to accommodate health department guidelines, plus a few cancellations and put on the community’s big winter event.

“I had to think quick,” Rolfe said, as a handful of performers or speakers had to back out, one venue had to be switched and concerns were expressed about throwing candy and serving outdoor food.

“It was overwhelming to get this to come together,” Rolfe said, but very much worth it.

“It was such an extraordinary weekend and people were genially happy and elated about the event.”

A lot of local organizations helped make that possible.

“I thought it was an extremely successful event,” Rolfe said. “Both the Catholic Church and the Lutheran Church have always gone out on a  limb for the event.”

The Church of Ste. Genevieve sends the event’s itinerary to the diocese in St. Louis, which helps generate interest.

When it was decided that serving hot dogs and other food in Lions Park would not be advisable and that candy could not be thrown during the parade, others stepped up. The Women’s Club  handed out about  600 bags of candy in Lions Park.

“But we had occupancy control in the park,” Rolfe stressed. “That was what was important.”

Some 150 McDonald’s Happy Meal gift cards were given out to children 12 and under who had their photos taken with Santa in Lions Park.

“There was a steady line of people going trough the park, but there was only about 25 percent of the people in the park at any one  time.” Rolfe said. “They were lined up down the street  and we still had Vernon [Flieg] perform. It was still a real successful venue.” 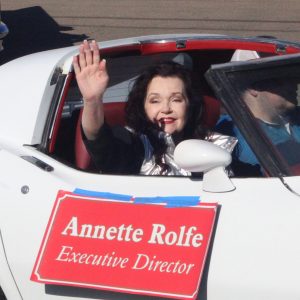 FESTIVAL WAS MADE SAFE AS POSSIBLE

Rolfe and her committee did everything they could to keep the gathering safe and keep it from being a spreader of the caronavirus. Masks were required for all indoor events and strongly encouraged for outdoor activities. Care was taken to limit large gatherings in small areas, so that some social distancing could take place.

“I have to especially thank the musical venues that came through for us,” Rolfe said. That included Chris Montgomery and Music, Art, Love, who filled in as a replacement venue for Isaac Lausell Trio and for Laurel’s later acoustic guitar concert.

“We followed the rules,” Rolfe said. “It’s all about following the rules and making it work.”

People complied with the mask and distancing requirements Rolfe said.

“I was extremely pleased,” she said. “I was so adamant that we had to do it this way. I know we can do it every year because we follow the rules. We tried to get the occupancy control. Only four cities in Missouri have mandates, but since it was a private event, I could mandate wearing a mask inside  the music venues because the musicians requested it. So, inside the music venues, everyone had a mask. There was not one musical venue where there was one person not wearing a mask, and I was very pleased with that.”

CHANGES DID NOT LESSEN THE FUN

What adjustments to the original program that had to be made did not seem to mar any of the visitors’ fun.

At the last minute, Matt Palisch was unable to bring his Joyful Sound Ringers hand bell choir, due to a couple of COVID cases in the group. Polish made the trip himself, though, and put on another dazzling pipe organ concert.

“He called me about a week in advance and said, ‘I’m going to be there.”

“I was lucky I had him,” she said. “He could have canceled.”

The musicians “were all really accommodating,” Rolfe said.

Rolfe also said that attendees also didn’t seem to mind the lack of available outdoor food that is usually part of the festival.

“They were fine with that,” she said. “They understood. Just to have this event was extraordinary.”