PERRYVILLE — The COVID-19 (coronavirus) pandemic has thrown every Missouri sports schedule out of whack.

The Valle Catholic boys’ slate is no exception.

Originally, the Warriors were scheduled to participate in the Scott City Tournament last week — however, St. Vincent became event host when the coronavirus forced Scott City out of action.

Valle Catholic handled the change with aplomb, winning two of three games on the week — with victories over Herculaneum 73-50 on Monday, Nov. 30 and Jefferson R-7 64-39 last Wednesday.

The Warriors had chances to beat St. Vincent on Friday evening. However, the Indians proved to have a bit too much firepower for Valle Catholic, winning 50-46.

“I’m happy with the way we performed,” said fourth-year head coach Tyler Search. “We had our moments. But, we didn’t take advantage of all our opponents, and it didn’t work out.”

Phillip Ernst converted a traditional 3-point play and John Wibbenmeyer followed with a drive inside to give St. Vincent a 45-33 lead with 3:20 remaining in the fourth quarter. 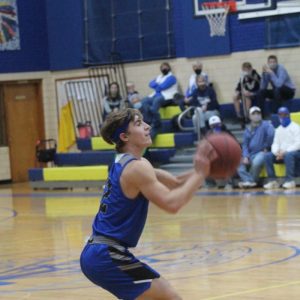 Then the Warriors began chipping away, and the game’s leading scorer Carter Hoog sank a 3-pointer from the wing — cutting St. Vincent’s lead to three points with 2.4 seconds left.

Carson Tucker and Nathan Schwent helped Valle Catholic surge toward St. Vincent with a couple of steals as the Warriors implemented a full-court press.

In hindsight, Search admitted he should have started pressing earlier in the fourth quarter — because it gave the Warriors energy.

Valle Catholic (2-1) also could have helped itself at the free-throw line; however, the Warriors made just 3-of-8 foul shots in the fourth quarter and they were 4-of-12 (33.3 percent) the entire game.

In addition, Hoog dished off four assists while Sam Drury and Harry Oliver had two each. Hoog and Sam Drury tied for top honors in rebounds with six. Fallert also had four steals.

Harry Oliver scored inside to give Valle Catholic a 13-6 lead at the 2:06 mark of the first quarter. However, St. Vincent rattled off the next seven points for a 13-all score after one period. A Hoog 3-ball brought Valle Catholic within three at intermission, 25-22.

Wibbenmeyer canned a clutch 3-pointer from the top of the key to give the Indians a 40-36 edge to close the third period (34-30). Search said that basket fueled St. Vincent’s fourth-quarter burst.

In the win over Herculaneum, Hoog dropped in 23 points with three 3-pointers. Cory Stoll, Sam Drury, Fallert and Oliver all tallied 10 points apiece.

Hoog and Stoll were the Warriors’ double-digit scorers versus Jefferson R-7. Hoog netted a season-best 27 points with four 3-pointers and 5-of-8 makes from the line. Stoll added 14 points on seven successful field goals.