The Valle Catholic High School girls’ basketball season opener versus venerable St. Pius X proved to be a learning experience for everyone.

The Warriors have a first-year head coach in Brian Bauman, and everything else seems so new, too.

In the end, an experienced group from St. Pius X handled Valle Catholic by a score of 36-27. 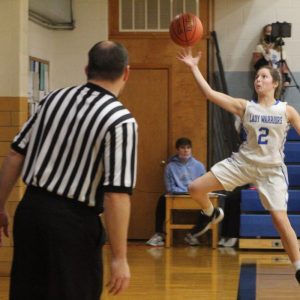 “It was a challenge,” Bauman said of the game. “We were making mistakes we were not making in practice. I’m a new coach, with new plays, and the girls are becoming familiar and comfortable with it.”

Bauman acknowledged he may have had the girls play a full-court press for too long during the game — hurting a team lacking depth.

Regardless, Valle Catholic’s rotation of girls remained competitive, and the Lancers didn’t have a double-digit lead until Colleen Flanagan connected on a bank shot at the 4:24 mark of the period.

Emma Christine made a layup to bring Valle within one after the first quarter, 9-8.

St. Pius Riley Cappozzo scored on a runner in the lane to give the Lancers a 19-10 edge with 4:11 left in the second quarter.

Valle responded with a Bryna Blum 3-pointer and an Ade Weiler basket, with the Warriors down six (21-15) at the break.

Ade Weiler saved the ball from going out of bounds, finding Hannah Fowler on an improbable pass for two points in the third quarter.

Valle Catholic was down 25-21 with 3:26 left in the third, but that’s as close as the Warriors would get the rest of the way.

Bauman thanked St. Pius for accommodating the Warriors, moving this game originally scheduled for mid-February. The Lancers were 20-5 last season, falling in the Class 3 District 3 playoffs to Cuba in the opening round.