A lifetime of preserving historic Missouri homes has been honored.

Tim Conley, one of Ste. Genevieve’s leading historic preservationists, has been lionized with the 2020 Missouri Preservation Elizabeth and George Rozier Award for lifetime achievement.

Conley’s most recent project was the salvation and restoration of the circa 1812 Auguste Aubuchon House at Washington and N. Fifth. He had previously saved the 1808 Louisiana Academy from impending collapse and also restored the 1794 Jean Baptiste Valle House.

When not in Ste. Genevieve, Conley restored historic homes in St. Louis and Louisiana, Missouri. 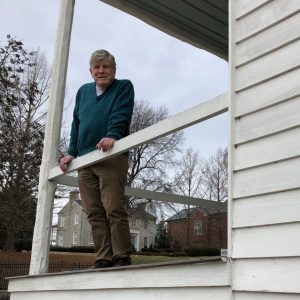 While the virtual public ceremony was set for this Tuesday, the awards were privately given out in Jefferson City on Nov. 10 in Governor Mike Parson’s office.

Due to COVID-19 restrictions, each recipient was limited on how many guests could be invited. Conley said he invited Frank and Annette Rolfe, who currently own the Academy building, and Mary Pillsbury Wainwright and her husband Don Wainwright.

“We were ushered into the governor’s anti-chamber with walnut paneling from floor to the 20-foot ceilings,” Conley said. “There we waited with our masks on and filled with anticipation until the secretary announced, “The governor will see you now,” and the enormous walnut doors swung open.”

Conley took advantage of the situation to invite the  Parsons to Ste. Genevieve.

“The governor assured us that he was very interested in our progress as a national park,” Conley said. “I invited he and his wife to come for a visit and see for himself. We agreed to facilitate the visit for this spring.”

Conley said the governor promised to give Conley, the Rolfes and the Wainwrights a personal tour of the governor’s mansion during the visit this week.

The visitors got to enjoy some of the governor’s mansion’s splendor that visit.

“The governor ordered the ornate balcony doors opened and gave us a private tour of the immaculately clean balcony with its panoramic views of the city and Missouri River spread out before our eyes.”

The visit was memorable.

“This is a day that will remain the highlight of my lifetime in historic preservation,” Conley said.

Conley has been preserving buildings for five decades. At the age of 21, he bought the Blair Huse McAvoy Mansion in the Lafayette Square neighborhood in St. Louis He put in some 10 years restoring it.

He the spent nine years in the Minneapolis-St. Paul area, restoring a pair of historic homes, before the historic  Louisiana Academy captured his attention and led him back to eastern Missouri in the mid 1990s.

Conley, however, was not the only one honored from Ste. Genevieve.

The restoration group received  one of three McReynolds Awards for the project, named for Elizabeth McReynolds Rozier.

The First Presbyterian Church purchased the house in 2006 and was able to begin restoration work in 2017 following a capital campaign and help from the Jeffris Challenge Grant.