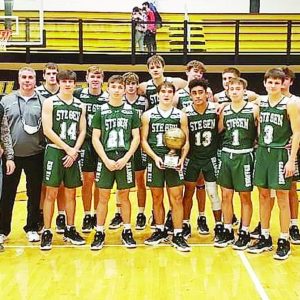 The Dragons defeated Missouri Class 5 Battle on Monday by one point, 66-65, followed by a 62-53 conquest over Mineral Area Activities Association rival Potosi in the semifinals Thursday.

Ste. Genevieve stands at 3-1, with the only blemish to the defending Class 2 state champions Hartville back on Saturday, Nov. 28.

“Against Farmington, other than the first basket, we led the entire game,” Coleman continued. “We did a great job of controlling the game and answering every time Farmington made a run.”

Farmington cut the Dragons’ lead to three points in the fourth quarter; however, Ste. Genevieve made big plays and hit free throws down the stretch to preserve the victory.

That’s not bad for a team coming into this tournament seeded sixth.

Trollinger finished the championship game with 22 points, including three 3-pointers and 7-of-10 from the free-throw line.

Ste. Genevieve was up 19-8 at the end of one quarter, 29-23 at the break and 40-33 after three periods before withstanding that Farmington barrage in the fourth quarter.

Anthony Nash finished with team-highs in rebounds (six) and steals (three). Trollinger dished off four assists and Flieg three to round out the significant Dragon numbers.

Flieg was the leading scorer in the victory over Potosi, with 21 points including 5-of-7 from the stripe. Trollinger and Lea scored 15 and 11 points, respectively, to help beat back Battle.