Chris Collins was surprised to be offered the role of grand marshal in the 2020 Ste. Genevieve Christmas Holiday Festival parade by festival executive director Annette Rolfe this fall. Collins, who has been in town less than a year, wasn’t expecting such an offer.

He agreed that it was quite a compliment to be given the honor less than a year after assuming duties as the first permanent superintendent of the Ste. Genevieve National Historical Park.

“Absolutely,” he said a couple of days before the parade. “I was a little astounded when she asked me. I thought, ‘I’m not anyone special. It should belong to someone else.’ But it should be a  lot of fun. I’m looking forward to it.”

Although the offer was made earlier in the fall, the COVID-19 pandemic has made things so fluid and unpredictable that Collins knew the parade was not etched in stone.

“I think everyone was a bit apprehensive, not wanting to commit to anything, not knowing how this would play out,” he said. “I’m very grateful to have the opportunity to serve in that capacity.” 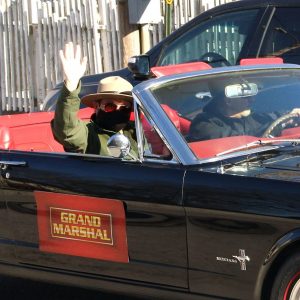 Collins had been serving as chief of business and commercial services at Indiana Dunes National Park prior to his appointment in late January. He had previously been at such sites as the William Howard Taft National Historic Site the Dayton Aviation National Historical Park and Glacial National Park. He came from the Kansas-Missouri border region.

Collins was pursuing a Ph.D. in French at one point, before switching to information technology and joining the National Park Service.

He said his time in Set. Genevieve has gone “really good” since being appointed in late January and moving here about a month later.

“I think we were really fortunate to be able to meet the secretary [of Interior]’s requirement for establishment. That was a huge accomplishment for this year,” he said. “Now the park is in a new phase, where we’re doing all the initial planning that a be unit has to do in order to figure out the path forward We’re really deep in that.”

He said he is also in the process of hiring permanent employees, the seasonal workers having largely completed their tenures here.

“There will be some permanent new faces around the park,” Collins said, “so we can have some assistance and we can carry forward with some of the really important work that we need to do.”

Collins has come to appreciate the history, heritage and charm that Set. Genevieve city and county offer.

“I’m astounded every day when I drive in at how special it is and how lucky I am to be able to work here,” he said. “I’m really enjoying it, the new relationship with the city and the presence in the Visitors Center and all they changes over there have been just fantastic. Everyone’s been really great to work with. I’m enjoying it. I’ve almost been here a year. It feels like it’s gone by in a flash.”

Collins agreed that there is something special about a parade.

“There is,” he said, “and so many of them were canceled this year Hopefully we’ll have a really good turnout.”

His only regret is that he arrived in an atypical year and hasn’t yet gotten to experience a normal year in Ste. Genevieve, complete with festivals and other annual events.

“It’s really unfortunate that I haven’t been able to see a normal year of events in Ste. Genevieve, what a normal year would look like,” he said. “I’m really happy that at least this event is going on in a somewhat normal  fashion.”