The idea of incorporating Johns into the Valle parade was Shuh’s idea.

“I had a friend that was in the court at Ste. Gen. and she told me they weren’t going to be having a parade,” Shuh said. “I knew how much fun a parade was for the people in the court and I felt bad for whoever would be crowned queen and I wanted her to experience everything I got to experience.”

Johns, the SGHS queen, was indeed keenly aware of the lack of a parade.

“I was a little bummed out at first, because, going through high school, you see all the pretty girls in their dresses in the parade,” she said. “I always loved watching them, so being in the parade myself was kind of exciting. Then, when all that was cancelled, I was a little sad. And I felt bad for the other girls, because that was the one chance we really had to have our one little moment.”

Shuh expressed an interest in reaching out to the SGHS queen.

“So, I went through the StuCo moderator and asked if we could make it a possibility,” Shuh said.

“I wanted to make sure she got to do everything I got to,” Shuh explained.

“When Valle asked me to be in theirs, it was very, very exiting,” Johns said. “To have that little moment is very exciting.

“She actually contacted Kyle  Schweiss, who was pretty much in charge of Homecoming stuff. He sent me her phone number and I talked to her. She was, like ‘I was wondering if you were interested,’ and I was, like, “Yes, please.’ And then I was in the parade.”

Johns said she really enjoyed being in it.

The two queens did not know each other before the parade.

“I was watching the (SGHS) crowning and I wasn’t sure who she was,” Shuh said. “I talked to her during the parade, and she seemed like such a fine girl.” 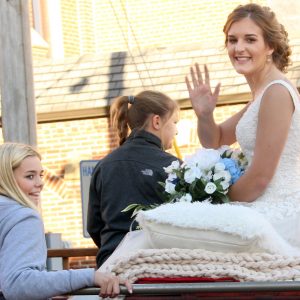 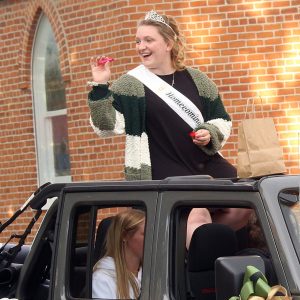