“A Christmas Pageant,” the third production by the Ste. Genevieve Theatre Guild in three years, will be performed  at 7 p.m., Dec. 12 in the Orris Theatre.

It will be based partially on existing scripts and partially written by Kristen Chibitty, who is also directing it.

Her son, Dominic Chibitty, wrote an original song for the play. Meanwhile, Kristen Chibitty commissioned an original poem by Michelle Swope, a published poet.  A recording  of swipes’ voice, reading the poem, will be featured in the play.

The guild  has done two previous plays, Nobody is Perfick in 2018 and Waiting For Godot in 2019.

“I was all set to do something earlier this year,” Chibitty said, when things began shutting down due to the pandemic. 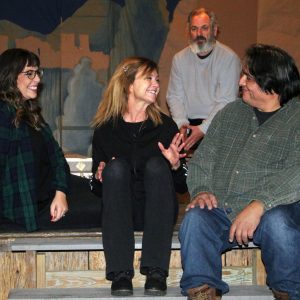 “This year’s been such a bummer, I thought it would be nice if I could somehow cheer up the community with something that would give them the Christmas spirit,” she said. “They keep talking about shutting everything down. It would just be some way to give back to the community.”

Admission to the play is free, and Chibitty hopes people will not be leery of attending.

“I know people are concerned about social distancing and all that,” she said. “People have raised concerns. I completely understand people’s fears. If they’re not comfortable coming to the play, I totally understand that; I’m not judging anybody about that. But, if there are people on the fence about coming, I would say to them, if you’re comfortable going to the grocery store, you’re OK here because all of the tables are socially distanced and you’re not sitting one on top of another like in a regular theater. You’re sitting in your own little private group. You can just sit at your own table if you want to.”

Another art backer led Chibitty to go for the production.

“I kind of owe the whole play to Chris Alexander, who runs Music, Art, Love,” Chibitty said. “My son Dominic performed at her open night one night. He said ‘You ought to get to know my mom. Se runs the Ste. Genevieve Theatre Guild.’”

She and Alexander met and agreed to hold an improv night at Alexander’s establishment. Alexander wanted to make it a monthly event, so Chibitty expanded it to include whole scenes, “kind of pushing people a little bit further” in their performing.