VAN BUREN — Throughout life, we’re all tested — whether it be a classroom exam or a challenging opponent.

“Hartville is a good team and tough competition for us early on,” said Ste. Genevieve head coach Robert Coleman. “We were excited when we heard we were going to play them.”

There were times when Ste. Genevieve was successful pushing the tempo — which helped the Dragons connect on 10 3-pointers. 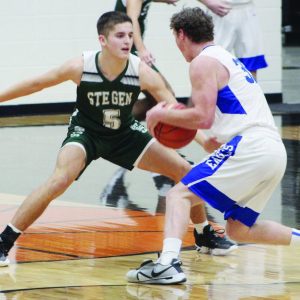 However, Hartville had four players score in double figures as the Eagles triumphed over Ste. Genevieve 79-48 at Van Buren High School.

Hartville’s Brady Ward made good on a traditional 3-point play to give the Eagles a 17-11 lead with 2:12 left in the first quarter.

The score was deadlocked twice during the opening quarter. Braden Branstetter canned a 3-pointer for Hartville, and Ste. Genevieve’s Carter Klump responded with a bucket inside for a 20-19 Eagle lead at the end of one.

Hartville asserted itself in the second and third quarters, outscoring Ste. Genevieve 47-23 during those frames for a 67-42 lead. The Eagles built the lead to the point of a running clock during portions of the fourth period.

“They have a lot of size in their starting line-up,” Coleman said. “Even their guards had size. They defended us really well. They had great help defense, jumping out to the ball.”

Coleman said turnovers were a problem for the Dragons, with Hartville forcing 25 Ste. Genevieve gaffes — and the Eagles had a whopping 54-10 edge with points “inside the paint.”

Still, Ste. Genevieve created some positive outcomes against one of the state’s best programs. Plati paced the Dragons with 12 points, including three 3-pointers.

Blake Morganthaler, Ricky Hunter and Logan Trollinger all canned two 3-pointers each as part of 10 overall for the Dragons. Even Klump, a post player, swished one from deep in the third quarter.

Ryce Piper was the game’s leading scorer with 20 points, including 8-of-14 from the field and a perfect 4-of-4 from the free-throw line. Teammate Braden Branstetter added 19 points, Cody Mahan 17 and Eli Cook 12.