Thomas H. Sutterer, 82, of Perryville, Missouri passed away Monday, November 16, 2020 at his residence.

He was born June 9, 1938 in Perryville, Missouri to Eloy and Iola (Moll) Sutterer.  He and Geraldine “Gerry” (Kiefer) Sutterer were married August 22, 1959 at St. Mary’s of the Barrens.  She survives in Perryville.

Tom was a member of St. Vincent de Paul Catholic Church. He served in the U.S. Army as Counter Intelligence in Berlin Germany. 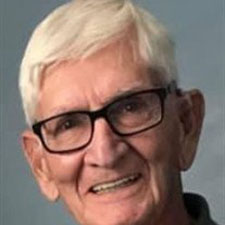 Tom’s lasting legacy is that he was a community builder.  Tom’s professions include from 1973-1979, he was the vice-president of a large corporate lumber and home building center. From 1979-1988 he managed a local building components and roof truss plant. Tom’s most distinguished career was a Building Contractor where he built over 30 custom homes in the community.

He also served many prominent roles within the community. He served on the Planning & Zoning Commission, Labor and Housing Task Force. His devotion to growth for Perry County was evident by his service with the Lions Club, Rotary Club, City Council and 10 years with the IDA Board. During his tenure, they acquired TG (U.S.A.), Solar Press and NPS Corporation as aggressive Perry County Employers. He also served on the Perryville Development Corporation and the Chamber of Commerce, where he was instrumental in bringing the higher education center to Perry County. In addition, Tom served as presiding Commissioner in Perry County from 1999-2006.

Tom loved spending time with his family and friends. He lived life to the fullest, playing cards, spending time at the family cabin, and camping.  Tom left this world a better place than he found each day of his life. He was loved by many in the community and his infectious smile and personality will be dearly missed

He was preceded in death by his  parents and one brother Michael Sutterer.

Family has requested that all attending, please wear masks.

Online condolences may be made at www.fordandyoungfuneralhome.com.

Ford & Young Funeral Home is in charge of arrangements.