City of Ste. Genevieve aldermen continued discussions on the levee property during a work session from Nov. 12.

Recently, the Joint Levee Commission convened for the first time in 16 years, approving Levee District No. 3 as an agency to convey property to the United States Fish and Wildlife Service (USFWS). 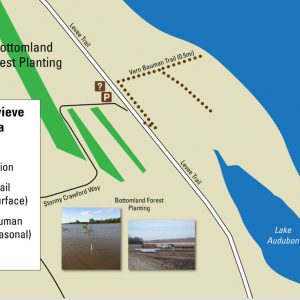 City administrator Happy Welch requested discussion on the matter because the city needs to establish a budget to expend funds from the Capital Projects Fund for signage along the levee.

Money also will be spent to put in a parking area for vehicles and to cover the cost of a survey to be performed that will subdivide the property so about a 70-acre tract on the east side can be donated to USFWS.

The piece of property will become part of the Middle Mississippi River National Wildlife Refuge – which will allow for a connection between Ste. Genevieve and the river.

Local historian Robert Mueller provided a map, and he was available through a Zoom teleconference to answer any questions during discussions.

The board also must approve the naming of select areas in the area.

The entrance road to the parking area will be named in honor of ornithologist and noted conservationist Stormy Crawford, who died on July 17, 2015. Stormy’s mother, Lucille Jokerst Crawford, was a Ste. Genevieve native.

A trail extending east from the levee is expected to be named for Levee District No. 3 president Vern Bauman. Also, the borrow pit will be named Lake Audubon.

The parking lot will be composed of mainly rock and limestone, and the area also will be cleaned up.

It’s expected to become the second budget amendment under capital projects. The city recently approved $65,000 in spending for a retaining wall near the intersection of Fifth and Washington Streets.

This topic will return as an action item at the regularly scheduled board of alderman meeting slated for Dec. 10.

Welch said the entire process of transferring the area to the USFWS will take up to two years.

City leaders also had talks for several minutes on what to do with the city’s maintenance agreement for flood buyout properties.

“We have bumped into some insurance companies that will not add the flood buyout property onto the homeowner’s policy,” Welch said in a memorandum to the aldermen.

“The reason given is that the homeowner does not possess the property leased from the city,” Welch continued, “and they, as the insurance company, will not add the city on as an additional insured to the existing property coverage.”

Also, it was recommended — in the public’s best interest — that the community garden on Main Street should not be required to carry additional insurance.

Welch noted the city has not had any previous incidents at these flood buyout properties in the past.

An amendment to the maintenance agreement will come before the board on Dec. 10.