There were many reasons to smile on Thursday as the Ste. Genevieve High School boys’ basketball team opened the season with a successful jamboree.

“I really liked our effort, especially in the beginning with our full-court press (defense),” Ste. Genevieve head coach Robert Coleman said. “We pushed the tempo and set the tone.”

Coleman said he also was pleased with the Dragons’ depth.

That’s for sure. Twelve different boys scored at least two points as Ste. Genevieve showed it could be explosive on offense. 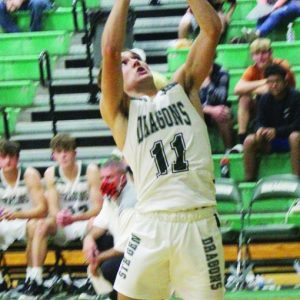 Logan Trollinger was the team’s leading scorer with 14 points, including two 3-pointers and 2-of-2 from the free-throw line.

Coleman said he was happy to see the Dragons be able to begin the season, even as the COVID-19 (coronavirus) pandemic shows no signs of slowing down.

Coleman reported players are wearing masks while on the bench, and the team used water bottles for refreshment.

The Dragons opened the jamboree with a flourish, netting 16 points during the first period. Ste. Genevieve tallied double-digit points in four of the six periods played.

The Dragons are coming off a 13-15 season, according to records kept on MaxPreps, finishing third overall in the Mineral Area Activities Association Large School Division.

Coleman said after watching video from the jamboree, one glaring area of concern is boxing out for rebounds. That was one area Herculaneum had the upper hand.