Work is ongoing to prepare the future home of the Ste. Genevieve County License Office.

Once that is completed, brand new computer equipment will be installed.

Helping make that possible was a recent $10,000 donation by Bloomsdale Bank. Bank president Robert Palmer officially presented the check to the Ste. Genevieve Chamber of Commerce, the group who won the contract to run the office.

“Everybody in the community has been without the license office for several months,” Palmer said. “It’s something that we really miss. So when we  found out the chamber was going to be granted the facility, we wanted to do what we could to help them get started. Especially this year, the chamber doesn’t have a lot of extra resources, so we thought this would help get them  going and help get the license office back in the community.” 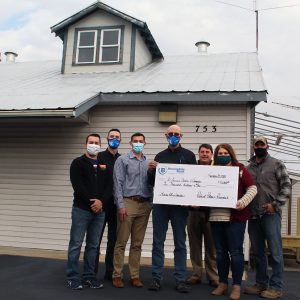 Dena Kreitler, executive director of the chamber, hopes the office may be open before the end of 2020. Before that can happen, though, 40 hours of in-person training must take place for the new staff. That has proven problematic.

“The hiccup has been the pandemic,” Kreitler said. She hopes the local staff may possibly be able to attend training along with the staff of one of the neighboring offices, like Festus.

An additional goal is to see if the highway patrol will join them in the building and offer drivers’ tests there.

The project has been overseen by the chamber’s License Office Committee, including Kreitler, Greg Hilbert, Clint Wolk, Jason Blum and Jason Schott.

The local office has been closed since mid March due to COVID-19. Wayne Grusling decided not to renew his contract with the state to run the office. It officially expired March 29. Grusling’s Vehicle Tax Services LLC had operating the bureau since March 2016. The state began accepting bids for a new contractor in May, but the process dragged on for months, prompting the Ste. Genevieve County Commission to request the Herald run the state license office and governor’s office phone numbers, with a request that frustrated residents call and complain.

That, along with continued help by State Representatives Dale Wright and Elaine Gannon, finally led to the contract being awarded to the chamber.

In a bizarre twist it was then delayed another month, when the bidder who finished last of the five bidders, filed a protest, which was later denied.