The Ste. Genevieve and Valle Catholic High School girls’ basketball teams opened the 2020-21 season with a jamboree on Friday evening.

In addition to the hometown duo, Delta and Saxony Lutheran of Jackson also participated in the jamboree.

Both the Dragons and Warriors coaches weighed in on how the jamboree went down for their respective squads. 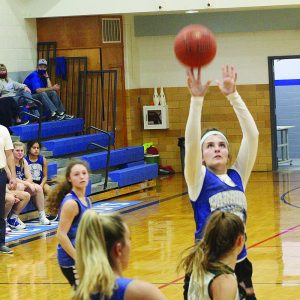 “I liked our full-court press early on against Delta,” said Ste. Genevieve head coach Jordanna Walk-Robison. “The girls did a good job of putting pressure on the ball, and reading over-the-top passes.”

“We began the night a little slow, shooting ourselves in the foot with sloppy play, turnovers and forgotten assignments,” Bauman said. “But I was most impressed with how we responded.”

Ste. Genevieve defeated Valle Catholic in both quarters by scores of 11-5 and 12-7. The Dragons also topped Delta in those two quarters, 13-4 and 16-5. However, they lost both quarters to Saxony Lutheran by tight margins.

The Warriors were unable to win any quarters throughout the event.