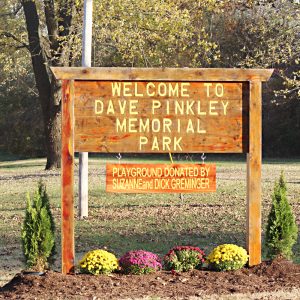 “It was a great feeling to see that,” said field operations supervisor Gary Roth. “Dave wasn’t only my boss, he was my best friend.

“All of his grandkids, and all of his brothers and sisters but one were there,” Roth added.

Pinkley died on Friday, Jan. 13, 2017, reportedly suffering a heart attack after working a shift during a harsh winter weather event. He was 56.

More than 50 people attended the dedication, which lasted 15 minutes and featured several speakers.

“It finalized that little park to be memorialized to Mr. Pinkley,” Hassler said.

The park sits near North Gabouri Creek. Possible future improvements are an access point to the creek and a potential modest walking trail.

Hassler, who officiated at Pinkley’s funeral more than three years ago, reported Dave still has family living in this distinct Ste. Genevieve neighborhood.

Dave Pinkley was involved in many civic organizations here, including the Knights of Columbus, the Eagles and the Elks Clubs.

Roth made the signage at the park, which features yellow lettering against a woodsy background.

There are two signs – one for Pinkley and another noting that Dick and Suzanne Greminger recently donated playground equipment to the park.

“He did anything you asked him to do,” said Greminger, who served as Ste. Genevieve mayor while Pinkley was superintendent. “Dave worked for the city for several decades. He was the kind of guy who always had good ideas.”

The playground equipment had been used at a daycare facility the Gremingers were operating on Hyler Drive in Farmington.

The equipment, which resembles a tropical tiki hut, features a pair of slides on the right-hand side, a bridge and a climbing rope in the middle and sliding tubes to the left.