Valle Catholic downed Woodland in five sets in the Class 2 sectional final followed by a straight-set sweep over Saxony Lutheran in the state quarterfinals by scores of 25-12, 25-22, 25-17 on Super Sectional Saturday.

“Woodland does a great job of ball control,” Fischer said. “As a team, they make few mistakes and keep the ball in play. They also were aggressive, and smart servers.”

The Cardinals’ service game certainly kept the Warriors on their heels, especially in the opening set Woodland won rather easily.

Sectional Saturday is the biggest challenge in Missouri scholastic volleyball, with teams needing to win two matches in order to make the state’s Final Four.

“Sectional play was definitely more challenging this year with the 3-out-of-5 format,” Fischer said. “In the past, the most sets you could possibly play in one sectional day was six. With the new format, that number has jumped to 10.”

With Saxony Lutheran sweeping Malden, playing earlier in the day, and having home-court advantage, Valle Catholic still had some obstacles to overcome.

And that’s exactly what the Warriors did, defeating Saxony Lutheran in straight sets for the third time this season.

For seniors Riley Siebert and Hannah Fowler returning to state is a full-circle accomplishment.

“It’s especially sweet for seniors to remember their final season,” Fischer noted. “Riley and Hannah both dressed on the 2017 team that placed third at state, so this is a nice way to finish out their high school volleyball careers.”

Fischer explained the state titles and second-place finishes were all when Valle Catholic was a Class 1 school — so this marks the second time the Warriors will be in the Final Four as a Class 2 program.

The Warriors have the daunting task of playing Miller, with its incredibly tall front row.

“They have two very tall players (6-foot-1 and 6-foot-2) that could cause us problems,” Fischer said. “We know that they have played well and won against a number of traditionally strong teams.”

Valle Catholic was called for four hits to give Woodland the deciding point in the fourth set, forcing Game Five.

Rachel Blum was the star for Valle Catholic in the conquest over Woodland, winning 30 points on her serve with four aces.

Blum’s serving runs in the third and fifth sets essentially lifted the Warriors to victory. She also scooped a team-best 24 digs and tied teammate Mia Weiler with 17 accurate serve receptions. 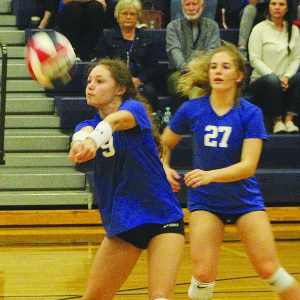