The Ste. Genevieve High School football team appeared rusty after not playing for two weeks due to the COVID-19 (coronavirus) pandemic.

Regardless, the Dragons scraped off that rust — outscoring Dexter 20-0 in the second half en route to a 46-28 victory in the Class 3, District 1 quarterfinals at Dragon Field in Ste. Genevieve on Friday.

“Our safeties were helping with the run, so they were throwing the ball over our heads,” said Ste. Genevieve head coach Ken Weik. “We had to stay back more in pass coverage.”

Dexter’s Ryan Collier snared four TD receptions in the opening half, and the Bearcats were ahead 28-26.

Thankfully for the Dragons, their offense was able to keep up with the Bearcats in the opening half. 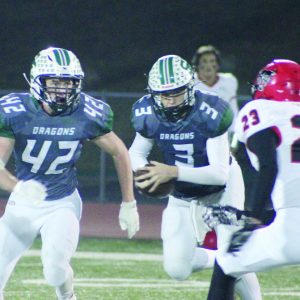 Dexter was ahead by double digits most of the first quarter, and Ste. Genevieve countered with TD runs from Zach Boyer and Aiden Boyer.

Kaden Flye helped the Dragons draw closer in the second quarter on a dazzling 68-yard TD run. Bryant Schwent added the extra point, and the Dragons were down 21-19 with about six minutes to go in the first half.

Zach Boyer and Collier traded TD before intermission, which featured a tribute to the late, great Mal Kimmel.

The Dragon and Bearcat defenses matched interceptions in the third quarter, with both players wearing No. 7s (Ste. Genevieve’s O’Brien and Dexter’s Braxton Greenfield).

Zach Boyer and Aiden Boyer punched in three rushing TD in the second half to account for the scoring as Ste. Genevieve’s ball control demoralized Dexter.

“Our offense had some long drives, eight, 10 plays,” Weik said, “and we took away their big plays. We also tackled a little better (in the second half).”