PARK HILLS — The Ste. Genevieve volleyball team had swept Central during the regular season on Sept. 29.

This marked Central’s first district title since 2002, and the Rebels then proceeded to beat Visitation Academy in three and Dexter in five on Super Sectional Saturday — advancing to the state tournament at the Show Me Center in Cape Girardeau.

Meanwhile, Ste. Genevieve’s successful season ended with a 20-6 record, a six-win improvement from the previous year, and both regular-season and tournament conference championships in the Mineral Area Activities Association.

Basler said Central middle hitter Kaley Kimball was a focal point of the Rebels’ offense, and the Dragons had difficulty putting a solid double block on her. 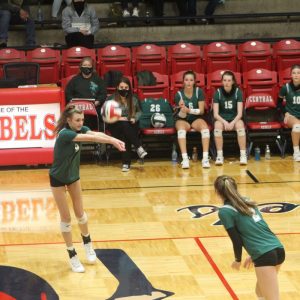 Central was ahead by as many as eight points on several occasions during the opening set.

However, Ste. Genevieve battled back and briefly had the lead after an Abby Moore kill made the score 28-27 in favor of the Dragons. However, the Rebels rattled off the final three points.

“We had momentum going into the next set,” Basler said. “We weren’t going to roll over and give up. I think the girls battled hard each and every set.”

Ste. Genevieve claimed the second set rather easily; however, Central responded by taking the third and fourth games to win the match.

The Dragons were already shorthanded coming into the match since senior middle blocker Marysa Flieg was unable to play for unspecified reasons. The team draped Flieg’s No. 26 over a chair before the start of the match.

Without Flieg, the Dragons had one less hitting option for brilliant senior setter Brittney Kreitler, who finished with a whopping 54 assists in four sets (13.5 helpers per game).

Moore was the Dragons’ leader in kills with 14, followed by 13 for Tessa Grass, 12 for Arie Taylor and Dru Koetting’s 11. Koetting also paced the Ste. Genevieve’s service game with three aces.

A.J. Prudent was used in Flieg’s role, and she finished with seven ace blocks, Moore added four and Grass three.

“The seniors were tremendous leaders on and off the floor,” Basler said. “They showed the underclassman the importance of leading by example, and gave 110 percent on the court. Our team will miss them tremendously for their talent, hard work and dedication.”