The second match between the Ste. Genevieve and Valle Catholic volleyball teams this season was much more competitive.

“In this match-up with Ste. Genevieve, we passed much better off serve receive, so we were able to get quality swings the majority of the time,” said Valle Catholic head coach Nancy Fischer. 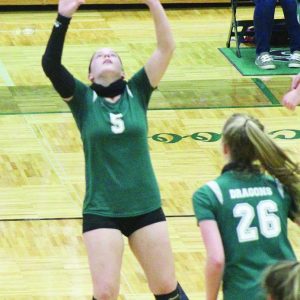 However, Ste. Genevieve’s blocking proved to be the difference the outcome of the match.

“We didn’t block well most of the evening,” Fischer noted, “partly because Ste. Genevieve moved the ball well, and their setter, Brittney Kreitler, did a great job of distributing the ball among their hitters.”

“The fact Brittney has many hitters to choose from makes it much more difficult for other teams to put up solid blocks against us,” Basler said. “Everything starts from the pass, and that is something we preach about and focus on in practices. Our blocking game is continually improving.”

The Dragons’ positioning along the front row was precise, and Ste. Genevieve finished the match with a decisive 8-1 edge in ace blocks.

Kreitler, Ste. Genevieve’s all-time leader in assists, had 27 of them on this night. 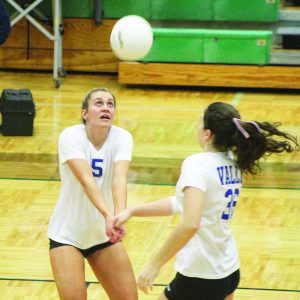 Still, it has been a successful regular season for both Ste. Genevieve and Valle Catholic. Both the Dragons and Warriors have been ranked high in state polling this year as the schools have combined for a 44-9-2 record.

Ste. Genevieve and Valle Catholic both earned regular-season MAAA championships, with the Dragons taking the large-school division and Valle the small school.

It culminated in a second match between the programs in the conference championship.

“That was a neat experience Thursday night to be able to play in the championship game against our cross-town team,” Basler said. “I think it shows what amazingly talented athletes and volleyball players we have in this town.”

“I think it speaks very highly of the level of volleyball being played in this area when the top two teams in the tournament were both from the same town,” she said.

Ste. Genevieve County takes the sport seriously, with many of the girls on USA Volleyball club teams in the winter and spring. It also takes volunteers putting their time and effort into coaching these athletes.

Valle Catholic’s Riley Siebert cut the Dragon lead to 20-19 before Ste. Genevieve rattled off five of the final six points.

The first set was more highly contested than the second. Flieg and Prudent combined on a block to give Ste. Genevieve a 24-22 lead. Siebert followed with a cross-court kill; however, the Warriors committed an attack error to give the Dragons the opener.

Parents took photos of the players with their championship plaques after the matches. Look for those shots on the Ste. Genevieve Herald’s Twitter account: @HeraldSte.

Another factor in the Dragon victory was attack efficiency, with Ste. Genevieve holding a .271-.217 edge in hitting.

Ace serves were hard to come by, with Valle Catholic’s Callee Naeger leading the way with three. Taylor served up a pair of aces for Ste. Genevieve. Both teams missed only four serves overall.

Lexi Parmer and Koetting were Ste. Genevieve’s leaders in digs with seven apiece while Mia Weiler scooped up nine digs and Loida eight for the Warriors. Both teams tied with 37 digs. Loida also finished with 23 assists.

Both Ste. Genevieve and Valle Catholic had one minor hiccup on the way to meeting in the title contest.

Potosi pushed Ste. Genevieve in pool play last Tuesday before falling by two-point deficits in both sets. West County extended Valle Catholic to three sets before the Warriors prevailed — and both advanced to the Gold Bracket.

Ste. Genevieve swept North County and Valle Catholic polished off Central in the semifinals. See tournament scores with this story.