He was employed as a civil engineer and was a long-time resident of Hannibal while working on construction projects at Clarence Cannon Dam in the 1970s and 80s – including the Indian Creek Reservation Area. 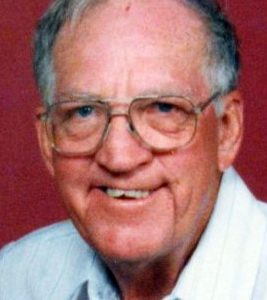 Jim was employed by Luhr Bros., Inc of Columbia, Illinois for 30 years and worked on a U.S. Army Corps of Engineer’s levee at historic Kaskaskia Island near Ste. Genevieve, before the great flood of 1993. Other major projects where he was quality control manager, were at a dam in Ft. Worth, Texas, and the placing of a landing strip over the former practicing bombing strip at Fort Polk Army Base in Louisiana for the takeoff and landing of Army paratroopers.

He was married to Sharon (Johnson) Canada of Hannibal on April 5, 1964 at Arch St. United Methodist Church, and is also survived by her and their daughter, Linda Allen; grandchildren Christina Gaddy and Joe Allen, and great-granddaughter Kyndal – all of Ste. Genevieve. Jim was pre-deceased by his parents, Effie and Everett Canada and a brother, David Canada.

He was a passionate University of Kentucky basketball fan and played guard on his Burnside High School and college years at Lindsey-Wilson, Kentucky, where he earned the name of “Stonewall.”

Jim was a member of Wesley United Methodist Church in Festus, Missouri, and has lived at Lake Forest Estates since Aug., 2001.

Visitation was at Basler Funeral Home in Ste. Genevieve Monday, followed by a graveside service the next morning at Crestlawn Cemetery with the Rev. Roger Faulkner.

Memorials can be made to the American Heart Association.

Online condolences may be left at www.baslerfuneralhome.com.