For Valle Catholic High School junior Aiden Heberlie, it was the chance to play in college baseball’s premier league — the Southeastern Conference.

Earlier this fall, Heberlie announced he had verbally committed to play baseball at the University of Missouri in Columbia.

“I wanted to play baseball in the SEC,” said Heberlie. “It means a lot to me to be able to do this.” 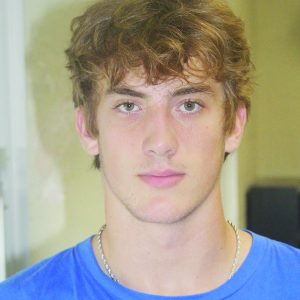 Heberlie also acknowledged playing the SEC will mean added pressure, but he’s used to it playing on Valle’s exemplary baseball and football teams.

He will have the opportunity to play baseball for former Ste. Genevieve High School standout Steve Bieser — now the Tigers’ head coach.

“He’s the fastest player I’ve ever had,” said Valle head coach Nathan Gegg said of Heberlie. “He’s able to track down a lot of balls. He’s shown a strong arm in the showcases.”

Gegg reported Heberlie can throw more than 87 mph from the outfield — not bad for a player who’s still transitioning from being an infielder. He’s committed just one error in his last 87 chances.

Heberlie currently plays for three teams: Valle, Ste. Genevieve American Legion Post No. 150 and the Adidas Academy based out of Chesterfield.