She painted herself as a political outsider and voice of reason. Galloway pointed to rising COVID-19 cases in Missouri, despite Parson’s op-ed in the Wall Street Journal in May that Missouri’s COVID-19 fight was a “mission accomplished” and stressed that she would do a better job of eradicating the virus and getting the state’s economy back on its feet. 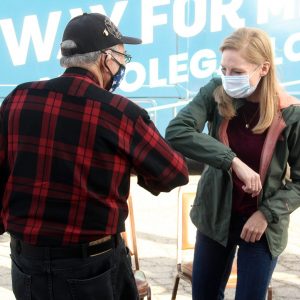 She criticized Parson for proposing the expansion of Medicaid, suggesting that it could be done in a way that would “create thousands of jobs” and save rural hospitals.

She had been state auditor since 2015. Prior to that, she served as Boone County treasurer.

Asked how she would appeal to traditionally conservative Democrats in a county like Ste. Genevieve, where President Donald Trump has gained some support, Galloway stressed nonparticipating.

“My vision for  Missouri is not a Democratic vision or a Republican vision,” she said. “It’s one that puts Missouri’s families first. This is a vision that helps working families succeed. Folks want access to health care, they want a good job close to home, they want good schools for their kids. As state auditor, I have looked under the hood of state government. I have found a lot of waste. I have found that the system is broken and I have held Democrats and Republicans responsible for the decisions they have made on behalf of Missourians.”

Galloway said that she can lead the state out of the pandemic and get things back to normal.

“We can get folks back to work, we can get our schools fully reopened and working people can have access to health care they can afford,” she said.