Currently various entities such as Ozora, Wolf Creek and Weingarten have fire associations.

Ozora fire chief Allen Schilli stressed that they were just looking to take a first tentative step toward the possible establishment of a fire district.

“We’re eventually trying to go there, but what we’re trying to do today doesn’t have anything to do with that,” he said. “We’re kind of getting our ducks in a row before we jump into it. We want to make sure everything with our Association is square, T’s crossed and everything, before we come before a judge for a district.”

Presiding Commissioner Garry Nelson pointed out that Wolf Creek had unsuccessfully tried to form a fire district once before. 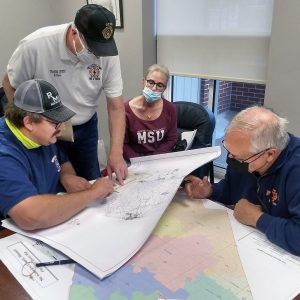 “My concerns are that the association lines or boundaries on the map are not overlapping into other association,” he said, noting that confusion over which residents were paying fire tag fees to which district could lead to problems.

“I didn’t see anywhere where it had to be surveyed, he said. “How do we know these districts are accurate?”

“The association boundaries can really be anywhere and can overlap,” Schilli said. “An association is really just a group of local citizens that formed a committee and decided to get fore protection for those that wish to join in. They can really pick any area they want, as long as it’s in the state of Missouri. And they may overlap, but that’s not a great idea because it complicates 911 … you don’t want any ambiguity in that.”

He said efforts have been made to avoid any overlapping.

“A district is a taxing government entity and a political subdivision,” Schilli said, “so it trumps everything”

“Personally, I’ve got the utmost respect for volunteer firefighters, what you go through, training on your own time on your own expense,” Nelson said. “Mick Schwent [former Ste. Genevieve fire chief] walked in my parents’ house wen it was burning down. He didn’t have any equipment because he only lived a block away. He carried my dad out. How many people can do that? Not very many people can do that. So, I have the utmost respect for you.”

Bart Mabry, Wolf Creek fire chief, said that getting the boundaries officially set is the hardest part of the process.

Association boundaries are supposed to be filed with the state, it was noted, but many are not.

After considerable discussion of the issue, a motion was made and passed to receive the filing for Ste. Genevieve County portion of the Wolf Creek Fire Association.

Felix Meyer, county emergency management director informed the commissioners that a Federal Emergency Management Agency (FEMA) grant application had been approved to get an emergency generator for the courthouse. This had been a goal for some time. It had been hoped for a while that a generator at the old Riverview at the Park  nursing home on North White Sand Road might be used at the courthouse after the  old nursing home was demolished. It was not compatible with courthouse wiring, however, making that option unfeasible.

Nelson noted that an emergency generator is much needed because of the elevator, especially with court cases upstairs. It would also cause havoc, he noted, should power go out on an election night.

It is a 75-25 grant, with the county covering one-quarter of the expense. Meyer said that a privacy fence will have to be built around it, in keeping with National Historic District guidelines.

It had been sought for five years.