With a football team as deep as Valle Catholic, one would expect someone new to step every week and contribute to a victory.

Bryce Giesler rushed only five times; however, the sophomore racked up 168 yards and two TD in Valle’s 67-12 conquest over Herculaneum at Father John Dempsey Field on Homecoming this past Friday night.

There were plenty of highlights on this crisp, fall evening — as the Warriors racked up a season-high 384 rushing yards, Joe Williams recorded eight tackles including three for losses and freshman Alex Viox tallied his first-ever varsity TD.

The Warriors (8-0 record) won despite committing four turnovers, including a pair of Chase Fallert interceptions — one of which was on the opening play of the contest. 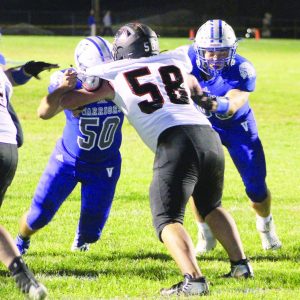 Still, the Warriors steady defense kept Herculaneum at bay, save for a pair of scores. The Blackcats finished the game with just 60 yards in total offense, including zero passing.

Naeger was proud of Giesler and Williams for turning in fine performances.

“Bryce (Giesler) is a great football player, and as he matures, he will continue to grow on the field,” the coach commented. “Joe (Williams) has been the backbone of our defense, he plays hard all the time.”

Cory Stoll also had a pair of rushing TD while Aiden Heberlie added a pair of scoring receptions from Fallert. Stoll leads the Warriors in rushing TD this season with 10.

In the second half, Carson Tucker punched in a pair of rushing TD — including one from 13 yards out. Tucker also had a stellar game defensively, with eight tackles, including six solo stops.

Herculaneum (1-5) scored on TD runs from Lucas Bahr and Logan Petri. However, the Warriors stopped the Blackcats on both conversion attempts.

Valle Catholic’s success on Homecoming speaks for itself, with the Warriors last known loss on such an occasion during the 2002 campaign — when Will Palmer served as head coach.