But, that could change with the Mineral Area Activities Association conference tournament set for this week at various venues across the region.

Attendance might have been limited due to the COVID-19 (coronavirus) pandemic; however, it was still a raucous environment.

“I think we played pretty consistent, which is a huge key in being able to pull off a win against Valle,” said Ste. Genevieve head coach Carla Basler, a former Warrior assistant.

Basler was satisfied with the Dragons’ passing, which gave setter Brittney Kreitler plenty of options for directing Ste. Genevieve’s offense.

“We did not play very well in our match against Ste. Genevieve,” said Valle Catholic head coach Nancy Fischer. “The Dragons played very well. We committed too many unforced errors, and Ste. Genevieve capitalized on those, as any good team would.”

In addition to the match between the Dragons and Warriors, fans also remembered the late Nichole Reed for her contributions to local volleyball.

Sara Menard read a statement before the match, and there was a brief moment of silence. A video the Ste. Genevieve Herald posted on its Twitter site (@HeraldSte) garnered scores of likes.

“Nicki coached USA Volleyball for a number of years and touched the lives of many players in our community,” Fischer said.

Basler shared her sentiments as well.

“The tribute Valle did in honor of Nicki was extremely thoughtful and kind,” Basler said. “I think it shows how special the community of Ste. Genevieve truly is. We can all rally together during difficult times, and it doesn’t matter what color you wear, green or blue.”

Read’s daughter, Avery, is currently on the squad at Missouri Science and Technology. Daughter Ella was a standout player at Ste. Genevieve who graduated earlier this year. 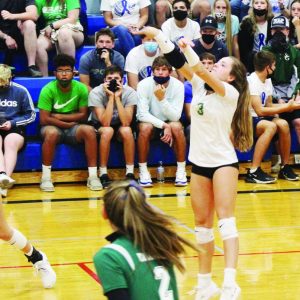 Ste. Genevieve recorded a .235 hitting efficiency in the victory over Valle Catholic, which included nine kills apiece from Marysa Flieg and Dru Koetting.

Valle Catholic also hit at a respectable clip (.215); however, the Warriors didn’t generate enough attacks against the Dragons. Ste. Genevieve also had an 11-6 edge in blocks, and had just four serve receive errors.

On defense, Valle Catholic libero Rachel Blum scooped up seven digs while Kreitler and Reynolds both had five digs for Ste. Genevieve. Kreitler dished off 31 assists to Loida’s 28 as both squads ran more of a 5-1 attack.

The first set was the least competitive, and Kreitler scored the Dragons’ 25th point on a free ball that took Valle Catholic by surprise.

The Warriors committed an attack error to give the second game to Ste. Genevieve. Koetting ended the match with a kill down the line.

Meanwhile, Ste. Genevieve had trouble with Jackson, falling in four sets in this Oct. 15 up-class match. But, the Dragons knocked off Fredericktown in four sets on Oct. 13. 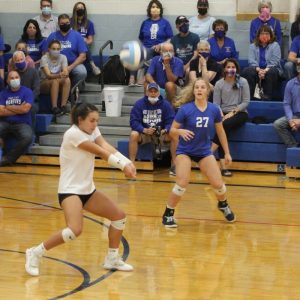 Ste. Genevieve enters the MAAA tournament with a record of 15-5 while Valle Catholic stands at 22-4-2.

Both the Dragons and Warriors won their respective divisions during the regular season. Ste. Genevieve entered the tournament as the No. 1 overall seed.