Wood reported that there were eight new cases in the county giving it a total of 266 since March. Of those, 35 were active.

“Our nurses call those people on a daily basis,” Wood said, referring to the active cases, all of whom are quarantined.

She added that there were also 12 “probable” cases. Those cases have symptoms, but have not been tested 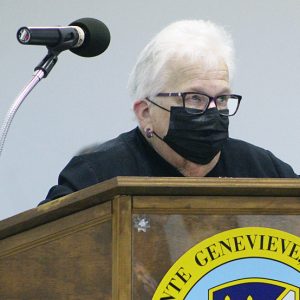 Wood said she felt the biggest reason for the recent jump in cases has been expanded testing. Currently 125,000 tests per day are being done statewide. Also, patients are routinely being tested before all surgeries, statewide.

Wood also said that during a Zoom meeting with governor Mike Parson and county health directors, a doctor reported that he doubts a vaccine would be available here before next spring.

Wood answered several questions from the board, including one from Ward 3 Alderman Mike Raney as to whether there was any likelihood of a vaccine being rolled out and offered to the pubic without the Food and Drug Administration (FDA) or other agency certifying it. Wood said she would do some research and get back to him on that.

Wood also thanked the board for wearing face masks during their meetings.

DEPARTMENT REPORTS ARE GIVEN

Welch reported that he had advised the police department to order vehicles early, due to factory shutdowns. The water department also needed a truck. Welch said it hadn’t dawned on him they would have to go through the board first.

Ward 2 Alderman Bob Donovan asked whether the police department had vehicles that needed immediate replacement Police chief Eric Bennett said that one needs an engine replaced and another is “showing the same symptoms” as that one.

He added that the city is “still showing some good numbers” in sales and use tax, despite the pandemic.

He also reported that city attorney Mark Bishop had [presented the city’s case to  24th Circuit Court Judge Jarel Lee Poor had approved the transfer of the Welcome Center and the Highway M water tower from the  Fund For Progress to the city.

Donovan asked whether another parcel had been involved. Welch said there was not.

Bova said the building inspector job had been offered to an individual.

He also noted that rental registration forms had been sent out to all landlords.

Roth reported that the creek on Chadwell Lane was “about 99 prevent cleaned.” He said brush had been cut, street markings painted sand other maintenance jobs.

Two trees were planted on Market Street and help was given in moving the diorama into the Welcome Center.

Ward 1 alderwoman Susie Johnson asked whether it would be enlarged.

He said it would not, but agreed that “it’s been unreal down there” and that people have been loving it,” thanks partially to the shade.

Carrig, meanwhile, said things are changing daily at the Welcome Center, thanks to the partnership with the National Park service and other groups. He said the Louis Pruneau diorama was nearly complete set up after being moved from the Amoureux House and that an exhibit from French Colonial America had been set up.

“If you haven’t been done there, it’s a lot different,” he said.

Johnson asked about advertising Carrig is entering into.

Carrig said that Facebook ads typically reach 2,000 to 5,000 people, but that a  special campaign the city is entering into  should reach 100,000 or more.

“It’s hopefully going to hit a lot of people and tell them about Ste. Genevieve,” Carrig said.