The victory improved the Warriors to 20-3-2 on the year, with a  perfect 4-0 Mineral Area Activities Association mark. 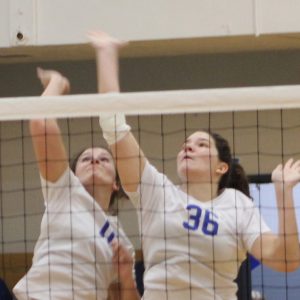 The Tigers gave the Warriors all they wanted in the opening set, before Valle pulled it out, 26-24.

“It was a combination of two things that made the first set so close against AV,” head coach Nancy Fischer said. “We missed five serves in the set, which was basically five points that we gave away and [Arcadia Valley’s] Maddie Dement did a really good job hitting around and through our blocks in the first set.”

On the night, Sam Loida scored 11 points, with one ace. Ade Weiler , Rachel Blum and Ella Bertram each scored five points and had two aces apiece.

Bertram led with six assists, while Joggerst had 10 dogs and Belle Fallert seven.