Ste. Genevieve faced some stiff competition  over the weekend at the Jackson Volleyball Tournament.

The Dragons went 2-3 in a stacked field of competitors.

The Dragons opened against eventual tournament runner-up Advance. The hornets, the tournament’s lone Class 1 team wound up falling in the finals to Jefferson City Helias, to drop to 190101 on the year. 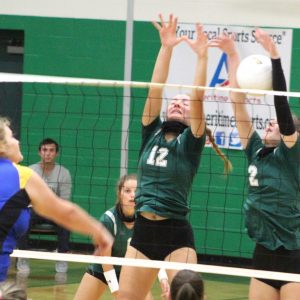 The team then faced eventual champion Helias and fell 25-15, 25-18. Grass and Flieg had five kills apiece, while koetting and Abby Moore each had three. Koetting had two blocks, while Kreitler contributed 16 assists.

Poplar Bluff was the next opponents. The Dragons skinned the Mules 25-11, 25-13. , Grass had six kills, Koetting four and Jaden Wehner three. Maci Reynolds had six aces, while Koetting and Taylor had two aces apiece.