The Boyer cousins got the Week-7 party started with two quick touchdowns during the opening quarter, and the Dragons’ defense did the rest by pitching a shutout in a 41-0 conference victory.

That defense allowed the Dragons (3-4, 2-1 MAFC-White), who are down to 29 players due to injuries, to eventually score three touchdowns in the third period, turning a 21-0 halftime lead into a blowout.

“That’s exactly what we asked for,” said Dragons head coach Ken Weik. “(Perryville’s) got a good offense. They run that option and it is tough to stop. It’s hard to play discipline against that when you only see it once a year. We used to see it all the time, but now you might see it just once a year and it’s hard to emulate. We asked our kids to do things they haven’t done all year and they stepped up and did it well.” 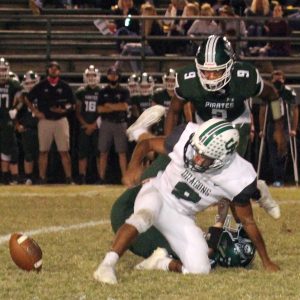 Those three second-half TDs were scored in a matter of 1:22. The latter two of those scores came when the Dragons forced two fumbles deep in the Pirates’ territory in what would become the game’s tally. They outgained Perryville 402 yards to 213, but only had 71 yards rushing.

The Boyers got things rolling just two minutes into the game. Sophomore quarterback Aiden Boyer twice found junior rusher Zach Boyer for screen passes in a span of 35 seconds. Both times Zach Boyer took off for TDs of 75 and 74 yards for a 14-0 lead with 9:25 left in the first quarter.

Aiden Boyer was not finished just yet as he added a third TD pass in the third quarter when junior receiver Kaden Buatte hauled in his only reception for 63 yards and a 28-0 lead at the 5:30 mark.

“We had some sophomore mistakes on the line in the second quarter which forced Aiden into some of his own mistakes,” Weik said. “We let some pressure get in back there as they didn’t handle the blitz real well, but the kids fixed it and did what they needed to do, which allowed Aiden to step up.”

Rusher Austin McBride closed the scoring with 4:18 left in the third with a 13-yard TD run.

Aiden Boyer should have had four total TD passes, but rules are rules. He found receiver Payton Matthews for a 55-yard reception that seemed to be an easy score.