The Warriors, bumped to Class 3 from Cxlass 1 this year, got 478 total yards on just 34 plays from scrimmage.

They started fast, leaping to a 27-7 first-quarter lead and never looked back.

Bryce Giesler picked up 102 yards rushing on just four carries. As a team, the Warriors ran 18 times for 208 yards – good for a nifty 11.6 mark per carry. 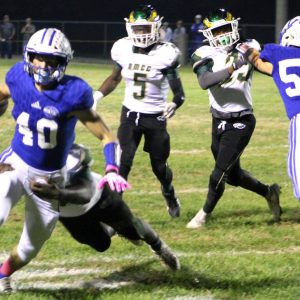 “We were very pleased with how we executed on both sides of the ball for the most part,” head coach Judd Naeger said. “We need to limit the big play on defense, and we need to run the ball a little better at times.”

Carson Tucker was second, with 42 yards on three runs, while Cory Stoll had 21 yards on six carries.

Quarterback Chase Fallert completed 10 of 15 passes for 225 yards  and three touchdowns. The sophomore has 1,685 yards through seven games, with 26 TDs against six interceptions.

Heberlie alsao led with four eceptions on the night, totalling 77 yards and one touchdown. Jayden Gegg had 101 yards and two TDs on three catches. Cory Stoll added one catch for 52 yards and Austin Nurnett three reveptions for 40 yards.

Fallert punted once for the Warriors banging a 50-yarder, to up his season average to a whopping 44.3.

On defense, Burnett had seven solo tackles and foyur assists, while Josh Bieser added four solos and eigyt assistsa, to pave the team. Bieser also had a quarterback sack.