Bits of Ste. Genevieve history are spread all over town.

At some point during the mid 20th century, fallen or broken tombstones from the town’s historic Memorial Cemetery started being spirited away from the old burial grounds.

The cemetery closed in 1882, with only Odile Pratte Valle’s grave being added in 1897.

“After the cemetery closed in 1882, it was just kind of left,” longtime Foundation For Restoration of Ste. Genevieve member Mickey Koetting said, “and it became kind of overgrown. Then it became a park, where people would come in and use it as a park.”

She said at one point the Idea was even discussed of putting in a swimming pool. 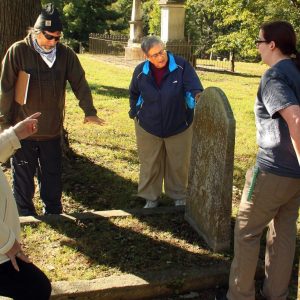 “So, when they came in, if a stone had fallen down, they tossed it on a burn pile in the middle of the swale,” Koetting said, referring to the large, sunken section of the cemetery. “I remember that, when I got here in the early seventies, that there was this big pile of brush and stones in the middle of the swale. So, local people would come in whenever they were doing their gardens or patios, picked up the broken stones, turned them upsidedown and put them in their garden – or maybe not upside down.

“That’s what happened to some of them,” she said. “That’s so long ago that people that live in those homes now, unless they’re upright, they don’t even know that they’ve got cemetery stones.”

Sara Menard said she has seen one that had been used as a cistern lid.

“So, they’re all over town,” Koetting said.

It is possible that in some instances, family members salvaged broken stones from their own ancestors, feeling  it was better to lovingly preserve them at home than to leave them to their fate on the scrap pile.

FOUNDATION WANTS TO GET STONES

The Foundation is embarking on a program to get the missing stones back, no questions asked.

“We have people that are able and willing to come and get the stones,” Foundation member Chelsi Montgomery said.

The Foundation has talked about making a special section in the cemetery for loose stones, whose original location are not known. It has been on the drawing board, but manpower and other issues kept it from taking place in the past.

“We have a designated spot,” said longtime member Sara Menard. “We had talked about repatriating stones that we didn’t know where they belonged, over by the fence. We were going to delineate it with some bushes, but we never got that far.”

There may well be people who have been wanting to get old tombstones out of their yards.

“People may know where the stones are. Some of them may be turned up and they’re going, ‘It’s so creepy having tombstones in our back yard. What can we do with them?’” Koetting said.

The Foundation’s Guibourd-Valle House actually has one in its garden, as well as an iron cross.

Only one full iron cross is still in the cemetery. The Foundation would like to recover any missing crosses that may be about town, as well.

“We are more than willing to put those things back where they should be,” Menard said.

“Even if people think they have something and would like us to come out and look at them,” Montgomery said.

Many graves are unmarked today.

“Wooden crosses that would have been used for those that couldn’t afford stones, those deteriorated in about 20 years,” Koetting said. “So, that’s why you don’t see so many tombstones in here. Plus, as tombstones fell over, they sank below the ground.”

Every now and then a missing stone is unearthed at the cemetery, buried for generations.

Care also has to be taken to keep the cemetery from being dangerous for walkers. A hole has developed around the grave of noted stonemason Dennis  McGill.