Kandye and Dale Mahurin were granted a special use permit to allow guest lodging in an R-2 General Residential District at 311 St. Mary’s Road at a special Planning and Zoning Commisison meeting, Oct. 7.

Kandye Mahurin had previously gotten a certificate of appropriateness from the city’s Heritage Commission to reconstruct a circa 1850 log cabin om property the couple owns in Perry County, behind the historic Wil Brooks house at 311 St. Mary’s Road.

Best know for being the home of Wil Brooks, probably the most  respected of Ste. Genevieve’s African-American citizens, the house was also built around 1850. It has been thoroughly restored and now houses Mahurin’s shop, Sassafras Creek Originals.

David Bova, community development administrator, said that the cabin still needs to pass a city building inspection, but that “They have passed everything to this point.”

Kandye Mahurin said there was a “little glitch with the sewer,” connecting to an existing sewer pipe.

“Other than that, everything is pretty well done other than final inspection and getting that sewer connected,” she said. 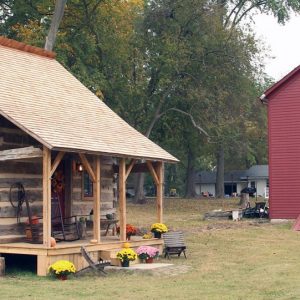 Commission member Kathy Waltz mentioned that in a Herald “Looking Back” column, the Brooks family had been mentioned recently. She also brought up the saving and original restoration of the house early this century, after it had nearly been lost to neglect.

“I remember about 20 years ago, when they painted the house blue, the family cane from all over and had a big celebration  in the side yard where the cabin is,” Waltz said.

She asked if Mahurin had contacted any of the Brooks family.

Mahurin replied that all three of Brooks’ sons are now deceased, William Brooks, Junior, former General Motors executive, had been the last to die.

“I reached out to … Will and Johanna Brooks’ great niece,” Mahurin said. “She said she didn’t really know her great-aunt and uncle, but she saw where I wrote on my blog about the history of the house and somehow she found that. I would like to get in touch with grandchildren, but I don’t know where they are.”

“That would be a  nice touch when you have a big grand opening,” Waltz said.”

“I do tell people the history of the house when they come,” Mahurin said. It’s basically a  free historic house tour. So, when people come and visit, or even locals …

She said she eventually plans to put a plaque on house, identifying it as the “Wil Brooks House.” Brooks bought the house in the 1920s and lived there until his death in 1984. It sat abandoned for many years and was nearly torn down to make way for the urban Design Levee in the 1990s, before historic preservationists rallied to save it.

In a town with a thin and checkered racial history, Wil Brooks was an icon, even having a short street named in his honor, by the old 911 center.

Brooks’ wife Johanna, was a key black educator in the early 1900s. She received her Master’s degree from what is now Harris-Stowe University in St. Louis. She died in a traffic accident in 1942.