There was the great and the not-so great, but Boyer has made superb strides since the season-opener versus Festus.

“Aiden gave up the pick six (to Central freshman Jobe Bryant), and that was tough,” said Ste. Genevieve head coach Ken Weik. “But, he made some plays and he competed.”

Boyer threw for more than 200 yards for the third straight game, and he also rushed for 141 yards on only 11 carries with two TD. He also had a pair of interceptions, including the pick-six. The Dragons finished with 450 yards in total offense.

Ste. Genevieve dropped to 2-4 while Central remained unblemished at 6-0 — winning on its Homecoming night.

“It was competitive,” Weik said. “We’re fired up to play that game. Central is well-coached, and it was a conference (Mississippi Area Football Conference White Division) game, so I thought it was going to be a toss-up.”

Both teams dug into their bag of tricks, too. 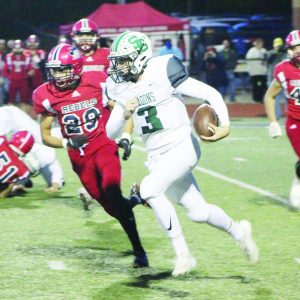 Ste. Genevieve had to feel confident heading into the third quarter with the Dragons ahead 13-7. Boyer dazzled the Dragon fans with a 77-yard off-tackle TD run in the game’s first minute, followed by Flye’s TD pass.

Central flipped the script by scoring 21 third-quarter points, and Justin Bridges booted home a 32-yard field goal with 8:25 left in the fourth quarter.

Still, Ste. Genevieve was undaunted, adding two TD including a 66-yard TD pass to Matthews from Boyer and Boyer rushed in from five yards out.

The Dragons had one final chance to win; however, Sutton forced Austin McBride out of bounds near the midfield stripe on a hook-and-lateral play.

Junior defensive tackle Dale Propst was the Dragons’ leading tackler with 12 stops, including seven solos and one tackle for loss. Flye also killed a Central drive in the second quarter with a dazzling one-handed interception near the goal line.

Ste. Genevieve continues its run of MAFC White Division games as the Dragons travel to Perryville for a 7 p.m. Friday tilt.