Ste. Genevieve High School volleyball player Brittney Kreitler stepped behind the service line as the Dragons clung to a one-point lead in the fifth set versus Farmington.

Kreitler’s serve proved to be too much for Farmington to handle as Jade Roth’s reception directed toward the net.

The match itself lasted more than two hours, and Kreitler continued her record-setting season.

Brittney established a new benchmark for assists in a career with 1,198 — shattering the previous best set by Drue Lalumandier. She finished the match with a whopping 55 of the Dragons’ 60 assists.

“Farmington served aggressively, which made us struggle a bit on giving Brittney a great pass,” said Ste. Genevieve head coach Carla Basler, “which limited our options.”

Basler said, in turn, Farmington was able to put up a solid block because of that. 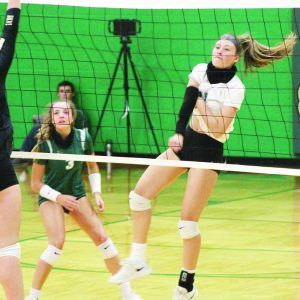 “When we were able to control the pass, things went well for us,” Basler explained. “It is our hustle and effort that allowed us to come out on top.”

Basler stated the Dragons were able to generate better offense in the fourth and fifth set. Maci Reynolds had some incredible saves in the back row which ultimately lead to various hitters recording kills along the front.

Sophomore Dru Koetting pounded down a career-best 20 kills and Flieg added 14. The Dragons had a hitting efficiency of .104, but it was enough to defeat Farmington. Tessa Grass and Kreitler added one solo ace block each.

Ste. Genevieve’s A.J. Prudent had the set-clinching kill in the fourth, on the same point Kreitler set the new school record for assists. Farmington also helped the Dragons (9-1) with a couple of front-row errors.

Roth was at her best in the third set, giving the Knights the win with several tips and kills down the stretch. Jelena Gray had the clinching kill for Farmington in the second set.

Ste. Genevieve swept St. Vincent of Perryville in a best-of-3 match on Sept. 28, with the scores 25-13, 25-17. This marked “Rally for Reed” night, in honor of math instructor Nicki Reed, who continues her fight against cancer.