The group gathered for a photograph which appeared in the Aug. 2, 2017, edition of the Ste. Genevieve Herald.

“We had pictures of the people we lost, it was like a memorial wall,” said Linda Brumfield Ruzicka, who serves as a de facto historian for her class.

The Class of 1967 has endured tragedy, with roughly 20 who have died since graduating from SGHS.

One of those people was Mal Kimmel, who died on Oct. 2, 1970, while a member of the Wichita State University football team.

Last week, the sports editor talked to Kimmel’s classmates, and reporter Chris Connelly also wrote a story you can read on ESPN’s website. Other newspapers across the country also marked the occasion with their own accounts.

Kimmel was a passenger in a twin-engine prop plane, which crashed into the mountainside near Silver Plume, Colo.

Rick Stephens, a Shocker lineman, reported Kimmel was asleep while the aircraft careened into a mountain at more than 110 mph.

Twenty-nine people were killed at the scene, and two others later died from their injuries while under medical care.

And as this tragedy pointed out, major air disasters can happen with clear skies and hardly a breeze.

After a thorough investigation, the National Transportation Safety Board released its findings in Report SA-421, File No. 3-1127.

“The intentional operation of the aircraft was over a mountain valley route at an altitude from which the aircraft could neither climb over the obstructing terrain ahead, nor execute a successful course reversal,” the report said.

The report concluded the Martin 404 was overloaded with luggage, there was the absence of a proper flight plan and the flight crew didn’t understand the limitations of the aircraft it was propelling.

The Rocky Mountains between Denver and Logan, Utah, aren’t easy to traverse — even for the most experienced of pilots. 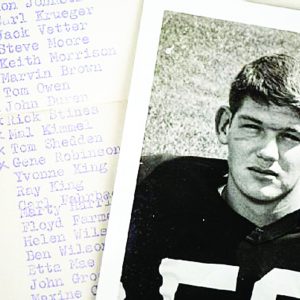 WHEN THE NEWS BROKE

Everything was seemingly going Mal’s way. After two seasons as Wichita State’s long snapper, Kimmel was told before the game with Utah State he would be the starting center. His wife, Diane, also was pregnant with the couple’s first child, Valory.

It was all taken away, with wreckage strewn across the Colorado mountainside.

“I was at home, pregnant, and four days away from giving birth to my daughter (Stacy Bell),” said Brumfield Ruzicka when she found out Kimmel died in the crash. “I was totally shocked and dismayed. I felt helpless.”

Brumfield Ruzicka watched a television news report, hearing an account that a plane went down. The crash was featured early in newscasts nationwide because it involved a college sports team.

Art Armbruster, another one of Mal’s classmates, heard the news from his mother, Marie Armbruster.

Armbruster had just graduated from basic training, and he was stationed at Eglin Air Force Base in Fort Walton Beach, Fla.

“It was sad,” Armbruster said. “Mal was such a good friend, and he was one of those gentle giants, a big man with a big heart. I was as heartbroken as anyone else.”

“Tell me it’s not true,” that’s what classmate Terry McDaniel said when he watched one of the St. Louis television stations reporting the crash.