“Jackson is a challenging team to play because they have a great combination of athleticism and physical size,” said Valle Catholic head coach Nancy Fischer. “Their fundamental skills are very sound and they are well-coached.”

Valle Catholic defeated Jackson during tournament play recently, so expectations were in place for a competitive match. The Warriors and Indians delivered in kind.

In the loss to Jackson, Riley Siebert did the bulk of work along the front row with 22 kills while Ella Bertram contributed two solo ace blocks and six ace block assists.

Libero Rachel Blum and Makayla Joggerst both scooped up 13 digs. Sam Loida recorded 34 assists. Mia Weiler was tops in serve receptions (18) and had two aces. Siebert also served up a pair of aces. Blum added 11 points from her service game.

Valle Catholic plays Kingston and Bismarck because they are part of the Mineral Area Activities Association small school division. 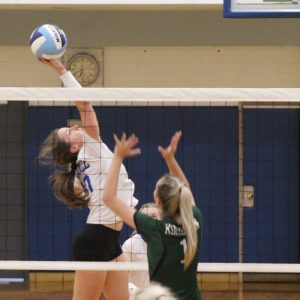