And the Warriors never looked back, remaining unbeaten on the season with a 47-14 victory in the team’s first road game of the season.

“They had a very good offensive and defensive line,” Naeger said of Jefferson. “We need to be more physical at the point of attack.”

Chase Fallert threw TD passes to Jayden Gegg and Aiden Heberlie and Cory Stoll and Gegg rushed for scores as the Warriors built a comfortable lead by the 7:51 mark of the second quarter. Stoll added his second TD run of the contest with 2:34 left.

The Warriors were ahead 34-6 at the break, and Fallert added two more TD passes in the second half — a second one to Gegg and one to Austin Burnett. Kolten Naeger connected on 5-of-7 extra-point kicks.

Fallert was 12-of-25 for 217 yards, four TD and one interception and Stoll paced a by-committee ground attack with 85 yards on 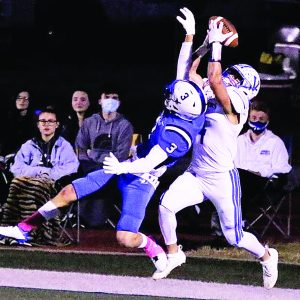 Jefferson dropped to 2-2, having two games cancelled this season due to a COVID-19 (coronavirus) outbreak in mid-September.