Noted scholar Dr. Charles Balesi is not a fan of “presentism,” which tries to impose current-day values and ideals on figures from history.

Geoff Giglierano, executive director of French Colonial America (FCA), in introducing Balesi, said that “there is a passion to this man that is incredibly engaging.”

Balesi noted that, as inconvenient as the COVID-19 pandemic has been, supporters of history may be able to find new ways of promoting it.

He then gave a time line of French Colonial activity, beginning with Samuel de Champlain, who founded Quebec in 1608. Balesi stressed that Champlain “established right away” a positive relationship with native Indian tribes, a relationship that would mark the remainder of the French’s time governing in North America. 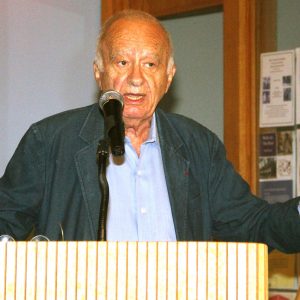 Minister of State Jean Baptiste Colbert helped convince 20-year-old King Louis IV of the importance of building up New France, as the colony in present-day Canada was called.

The need for wood for ship masks and other projects was a high priority, Balesi said. Fur, of course, was also a huge business.

A military governor and civil administrator were sent, along with a regiment of 1,000 soldiers. Those soldiers, who mingled and often married among the Native American population, were responsible for generating generations of French-Canadian inhabitants.

“There is a new wing in this country about revising history,” he said. “All of a sudden … we’re supposed to judge past events on the basis of the 2020 century and this doesn’t make sense.”

He argued that the French Canadians “did not display what we would call today, traits of racism.”

Expanding to the west through the fur trade seemed to be the ticket for New France.

The French purchased furs from Native Americans, as they moved west across the countryside.

Meanwhile, the Jesuits, a zealous evangelizing order of priests, also played a big role in the expansion. As the traders wet west (and eventually south), so did the priests, leading as many Native Americans as possible to faith in Christ.

This quest has also been painted in a negative light by many recent scholars.

Balesi, though, stressed that, “The idea of racism did not exist.”

He continued the narrative, describing the 1763 voyage of Father Jacques Marquette and fur trader Louis Joliet, which included tracking the mighty Mississippi River and René-Robert Cavelier, sieur de La Salle’s expeditions to the Gulf of Mexico.

Balesi noted that LaSalle, who had initially given up his inheritance claims while studying for the priesthood under the Jesuits, had developed a bitter relationship with them.

LaSalle, Balesi noted, had “the gift of languages,” and for putting native Indians “at ease.”

Balesi continued the narrative through the founding of Mississippi River communities including Kaskaskia, on through the French and Indian War, or Seven Year’s War.

Balesi wrapped up his presentation by stressing the importance of the surviving French colonial buildings in Ste. Genevieve that tie those days of French colonialism and evangelism with today.

“Why is it important to remember French Colonial history along this corridor?” he asked. “Because it’s a part of history that has left us with remarkable things.”

These and other architectural gems that “historically is worth keeping” allow visitors to tie in with that 17th- and 18th-century history.

He urged historic preservationists and supporters of heritage tourism to keep fighting the good fight.

“If you do your job well, hopefully you will pass them onto the next generation.” he said.