“They are extremely well-coached and talented across the board,” said Valle Catholic head coach Judd Naeger. “We had to honor everyone on the field at all times.”

The Valle Catholic-Blair Oaks clash came about rather quickly last week, finalized at 2:30 p.m. Thursday afternoon. The Falcons traveled from the Jefferson City suburb of Wardsville.

Both the Warriors and Falcons were seeking new opponents as the COVID-19 (coronavirus) pandemic continued to cause havoc with scheduling.

The Warriors battled through plenty of adversity, overcoming a whopping seven turnovers to defeat the Falcons.

“Our kids did an amazing job of moving on from mistakes,” Naeger said. “They played mentally and physically tough all night.”

Aiden Heberlie, who has become a highlight reel this season, caught a 65-yard TD pass from Chase Fallert with 11:41 left in the fourth quarter.

The collective Valle Catholic defense took over from there, stopping Blair Oaks on three successive drives in holding on to victory. 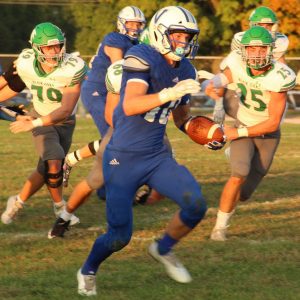 This game lived up to the hype from start to finish, as was noted in newspapers from across “The Show-Me State.” Even fans bantered back and forth on social media sites such as Facebook.

Chase Fallert, despite four interceptions, willed the Warriors back into the lead with a 42-yard TD strike to Heberlie and a 1-yard scoring run.

Perhaps the most important play for Valle Catholic (5-0 record) in the third quarter occurred on an untimed down as Austin Burnett caught a two-point conversion pass — giving the Warriors a 28-21 lead at the 2:14 mark.

Heberlie finished with five receptions for 129 yards and two TD.

Fallert gained 47 tough yards on 19 carries to go along with 168 yards and three TD passing.